MONTPELIER — Attorney General TJ Donovan, Bernie Sanders and other left-leaning voices are panicking over the prospect of another Trump judicial appointee landing on the U.S. Supreme Court, and are using the hot-button issue of abortion to rally opposition. 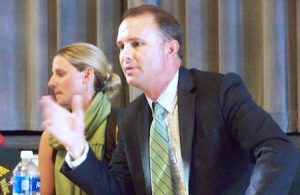 Brett Kavanaugh is a federal appeals court judge, a former aide to the second Bush Administration, and an investigator into President Bill Clinton during impeachment efforts. His nomination to the U.S. Supreme Court by President Donald Trump has won accolades from Republicans and moderate Democrats alike.

But experience is holding little weight with Vermont liberals, who seem interested only in his views on abortion.

“Title X clinics provide essential health care to low-income Vermonters,” Attorney General Donovan said last week in a news release. “It’s critical that they continue. That’s why I’ve created a website for Vermonters to tell HHS that these rules are bad for Vermont.”

The principles of Roe V. Wade have held for over 40 years and we need a Supreme Court Justice who will continue to defend a woman’s right to make decisions about her own body #vtpoli #scotuspick https://t.co/k8u1JWx97s

In a press release, Donovan doubled down on his pro-abortion rhetoric.

While Kavanaugh hasn’t explicitly stated his position on the matter, based on his past rulings and statements, some analysts think he would vote to overturn Roe v. Wade, the 1973 Supreme Court ruling that struck down state bans on abortion and legalized it nationwide.

“We all know that one way or another, Kavanaugh is going to be a vote to take away women’s right to choose,” commentator Paul Waldman wrote for the Washington Post. “To pretend otherwise is to be willfully obtuse.”

Planned Parenthood of Northern New England is also on the march to prevent the confirmation of Kavanaugh to the high court.

“Planned Parenthood of Northern New England opposes the nomination of Judge Brett Kavanaugh to the Supreme Court, and calls on the Senate to do the same,” Eileen Sullivan, PPNNE communications director, told True North.

“The selection of Brett Kavanaugh confirms our worst fears, because President Trump promised to appoint justices only if they would overturn Roe v. Wade. If he is confirmed, the rights and access we’ve spent decades fighting for could disappear, even though 70 percent of Americans support abortion rights.”

Bernie Sanders, I-Vt, on CNN expressed his dire concerns for not just abortion rights, but for the nation as a whole if Kavanaugh is selected.

“What we are talking about here is in a moment of American history where we have right-wing extremists controlling the House, the Senate, and the White House and if we appoint another right-wing extremist to the Supreme Court, I have very serious concerns about justice in this country and what will happen to the men, women, and children and the future of this nation,” he said.

Kellyanne Conway, counselor to the president, in an interview with Fox News, criticized Democrats for turning the Supreme Court nomination process into a single-issue matter concerned only with abortion.

“He has offered a breadth of opinions that people should go look,” she said. “If you listen to a lot of commentators on cable news and elsewhere on Twitter, they act like the Supreme Court only talks about abortion and Roe v. Wade. If you look at last two weeks of the Supreme Court’s term this year, the breadth and the depth of the opinions that they actually issue gives you a clue as to what they consider in a typical term.”

But Donovan and Planned Parenthood of Northern New England are determined to defend abortion by opposing Kavanaugh and the loss of Title X funding, which is intended for family planning matters such as contraception, mammograms, prenatal care and STD prevention, not abortions.

To get around the federal prohibition on taxpayer funds for abortion, Planned Parenthood applies for Title X money for approved causes, despite being an abortion provider. The Trump Administration is asking that Planned Parenthood physically separate the facilities that perform the abortions from the facilities that perform other services if it wishes to continue receiving federal funds.

If the abortion provider loses the funding, eight federally qualified health care centers in Vermont, each with multiple satellite service locations, could receive the funding.

One resident who commented at Donovan’s pro-abortion website appeared to disagree with the premise of the site.

“Any money that Planned Parenthood says they would spend on actual women’s health care should be given to community health clinics, of which there are many more than Planned Parenthood sites, therefore more accessible to women,” the commenter wrote.

Vermont Right to Life director Mary Beerworth has stated that the legalization of abortion would revert back to the individual states if Roe v. Wade is overturned. In Vermont, one of the most socially liberal states in the country, abortion rights would likely continue without restriction.

12 thoughts on “Vermont leadership panics over Supreme Court pick, goes all in for abortion”