An anti-slavery mural that some Vermont Law School students say is racist will remain covered up, following last week’s federal court decision in the school’s favor.

Installed in 1993, two murals depicting the evils of slavery have since been criticized by some students as portraying slaves as “cartoonish.” The school at first threatened to paint over the murals, but instead covered up the murals with tarps and asked artist Sam Kerson to remove them. He refused and filed suit last December. Kerson reportedly has promised to appeal the Oct. 20 U.S. District Court decision against him. 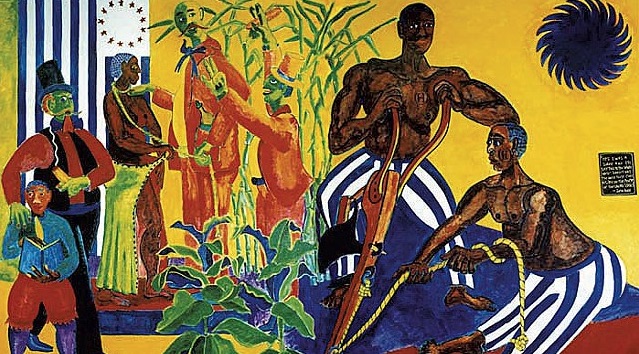 District Court Judge Geoffrey Crawford ruled that Vermont Law School’s right to display art of its own choosing outweighs Kerson’s claim that the school’s plan will harm the artwork or violate his federally-protected artists’ “right of integrity.”

The two murals were painted directly onto the sheetrock wall of Chase Hall. The school plans to build a wooden framework in front of the murals and permanently cover them with acoustic tiles.

According to the suit, the murals depict Vermont’s efforts to help slaves seeking freedom in the years before the civil war. Notwithstanding their nationwide recognition, in July of 2020, VLS announced that because of some complaints by students, who apparently found the murals “offensive,” it was going to paint over the murals. When Kerson learned of this, he advised VLS that he did not consent to destruction of his art and asserted his rights under the Visual Artists Rights Act (VARA). Nevertheless, VLS, purporting to give notice to Kerson to remove his art, informed Kerson that it intends to permanently cover the murals with acoustic tiles.

After the July announcement, Vermont Law School gave Kerson 90 days to remove the artwork. Kersson refused and filed suit instead, seeking an injunction to prevent the destruction. Kerson is a well-known Artist In Residence at institutions on both sides of the Atlantic. His works have been shown at the Vermont Supreme Court gallery, among other Vermont venues.

According to the suit, the murals depict the history of slavery including the capture and shipment of Africans to the Americas, the selling of captured humans in slave markets, the slave’s work condition, the suppression of African culture, abolition, resistance to slavery featuring important historical figures, and the Underground Railroad.

The depictions of Africans, slavers, and white slaveowners and abolitionists struck a wrong chord with a VLS diversity committee, which successfully petitioned school leadership to order the mural painted over. VLS President Thomas McHenry reportedly informed the school community in a July email in which he wrote, “However, the depictions of the African Americans on the mural are offensive to many in our community and, upon reflection and consultation, we have determined that the mural is not consistent with our School’s commitment to fairness, inclusion, diversity, and social justice. Accordingly, we have decided to paint over the mural.”