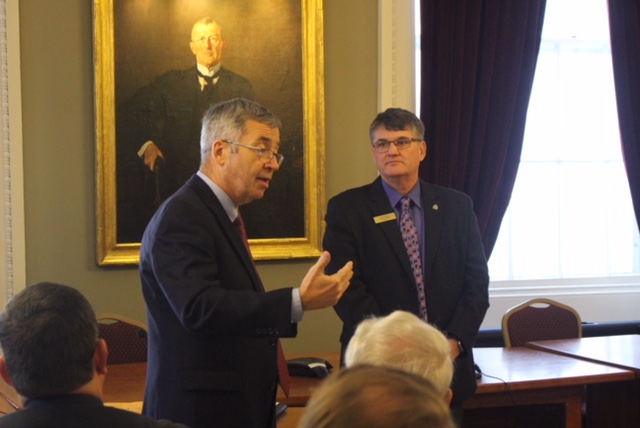 Republicans caucus on Wednesday and discuss amendment plans that were rejected Thursday, largely by House Democrats.

MONTPELIER, Vt. — In yet another chapter of the ongoing saga of marijuana legalization efforts in Vermont, the House on Thursday passed H.511, which allows for ownership of up to an ounce of marijuana and home cultivation of two mature and four immature cannabis plants.

The 81-63 vote came the same day that Attorney General Jeff Sessions rescinded an Obama-era rule that formerly allowed states to legalize marijuana across the nation without fear of federal prosecution.

Throughout the daylong session, lawmakers made several efforts to amend the bill in hopes of adding safety provisions to protect children and highway travelers. But one by one the amendments were voted down by the Democrat majority, usually after being dismissed vocally on the floor by Rep. Chip Conquest, D-Newbury, who spoke on behalf of the House Judiciary Committee.

H.511 is largely based on last year’s S.22, which was similarly passed by the House and consequently vetoed by Gov. Phil Scott. The bill removes existing penalties for possession of 1 ounce or less of marijuana and cultivation of two mature and four immature cannabis plants. It also prohibits consumption in public. The age limit for possession and cultivation is 21 or older.

While announcing his veto in May of last year, the governor made clear that he was open to considering legalization — but only if safety provisions were included.

“If the Legislature agrees to make the changes I am seeking, we can move forward with this discussion in a way that ensures the public health and safety of our communities and our children continue to come first,” Scott said.

But various public health and safety provisions never made it into the bill.

The most substantial amendment came from House Minority Leader Don Turner, R-Milton, who proposed to overhaul the bill for a fully regulated and taxed market. The amendment included funding and safety provisions Republicans discussed as lacking during their caucus sessions.

“I don’t like making a bad bill better, but I also understand when we’ve lost,” Turner said. “I don’t want Vermonters to lose with me — I want us to vote on this, tax and regulate it, it’s going to pass, and move on.”

From there the public safety-related amendments kept coming and failing, each by about a 60 percent to 40 percent margin. Rep. Anne Donahue, R-Northfield, proposed an amendment to expand penalties for marijuana use in an enclosed space with minors. Conquest was quick to argue against it.

“We recognize what the member is trying to do and agree that we do want to try to protect kids from exposure to any kind of second-hand smoke, whether it’s marijuana or tobacco smoke,” he said. “I know this won’t satisfy the member from Northfield, but we are willing to try to find a way to do it that … and the majority of the committee did not think this approach was the right way to go about it.”

Conquest offered variations of such refusals for each and every safety proposal offered.

Rep. Cynthia Browning, D-Arlington, proposed an amendment for a 2-pound limit on marijuana possession for those who are growing it. She said the bill’s 1-ounce public possession limit doesn’t apply to those are growing for personal use, meaning growers could store unlimited amounts of pot at home.

“This bill I believe opens up a loophole in which drug dealers could abuse the rights which those advocating to grow,” she said. “There is no limit to how much you can have as long as you can claim that you grew it yourself.”

At one point Conquest was asked how many joints could be rolled from 2 pounds of marijuana, to which he replied that he did not have an answer.

“It’s not really an answerable question,” he said. “ … There is one federally acknowledged dispensary and they have a size for a joint, but I don’t remember how many you could make.”

Given estimates of roughly 0.5 grams of marijuana per joint, 2 pounds equates to about 1,800 joints.

Rep. Bob Bancroft, R-Westford, called for an amendment to enhance penalties for those driving under the influence, and increased penalties for possession by those who are underage. Conquest said his committee was against it and the floor voted it down.

Donahue said she felt the Democrats were rushing ahead unnecessarily. “Today we have rejected proposals that were clear-cut reasonable ways to improve the bill for the specific issues that are of such a concern to so many of us, and that is the safety of all of us on our roads and the protection of our children,” she said.

“We also refuse to wait to get the additional information that might have helped to make a better bill,” she added, referring to the governor’s marijuana safety commission which has a report due later this month.

Rep. Kurt Wright, R-Burlington, said he was disappointed to see the Legislature putting marijuana legalization ahead of other issues.

“Right now we’re talking to people in Vermont and the first thing we are doing out of the gate here is [marijuana legalization],” he said. “Never mind the 9.4 cent tax increase that we are facing, but we’re going to let you smoke a doobie. Maybe when you smoke the joint you won’t feel that 9.4 cents so much.”