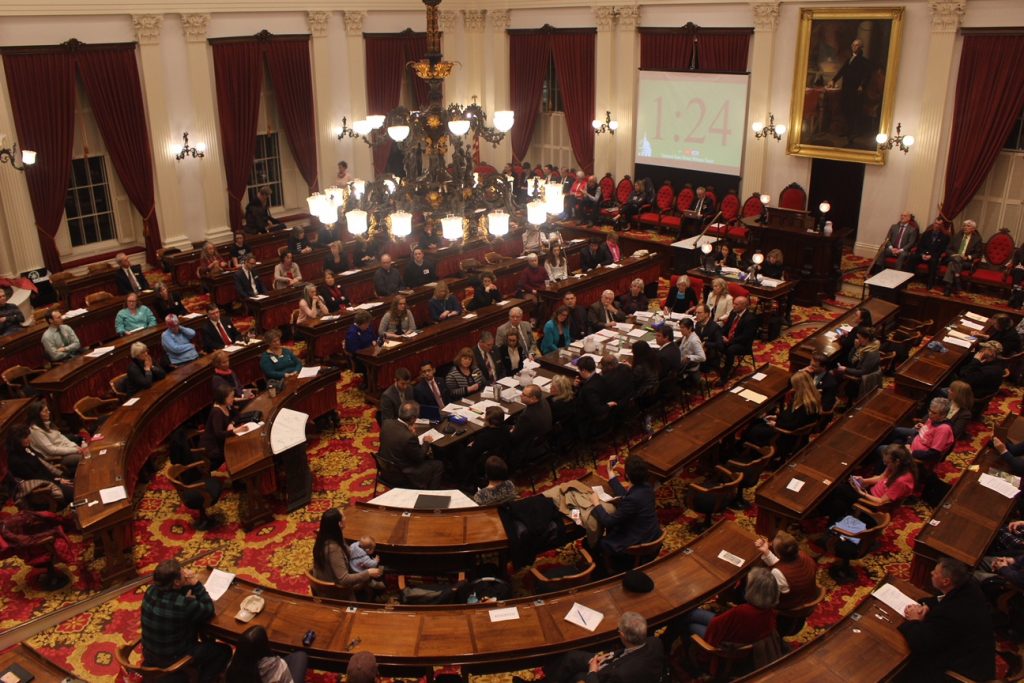 A PACKED HOUSE : About a thousand pro-life and pro-abortion activists crowded into the Statehouse on Wednesday evening to voice their opinions to lawmakers.

The 11-member committee met to mark up and vote on H.57, a controversial bill preserving the “right to abortion” for all nine months of pregnancy. After lengthy debate and a couple of minor changes, the the bill passed out of committee by an 8-3 vote. It now heads to the House Judiciary Committee.

Committee members narrowly voted to remove a part of the legislation that says “a fertilized egg, embryo or fetus shall not have independent rights under Vermont law.” Members voted unanimously, however, to clarify that the bill would not conflict with the federal Partial-Birth Abortion Ban Act, which Congress passed in 2003.

The committee’s three Republicans voted against the bill.

The development comes as approximately a thousand people met at the Statehouse Wednesday evening to voice their opinions on the legislation. More than 55 concerned citizens gave public comment at the hearing. Comments were evenly split for and against H.57, as committee leadership arranged for a balance of views from both sides. The crowds throughout the building seemed heavily on the pro-life side of the debate, however.

Emotions ran high during the two-plus hour meeting. In Vermont and across the nation, pro-abortion Americans fear that the landmark 1973 Roe v. Wade decision legalizing abortion nationwide might soon be overturned by the current U.S. Supreme Court. Moreover, support for third-trimester abortion has collapsed in the U.S., with only about 13 percent of Americans saying the practice should be legal, according to a May 2018 Gallup poll.

Meanwhile, just weeks ago in New York State, Democratic Gov. Andrew Cuomo signed a bill allowing babies to be exterminated up until birth. Virginia defeated a similar bill this year following comments from the governor and the bill’s sponsor, Delgate Kathy Tran, that appeared to many to allow partial birth abortions and post-birth abortions.

Last month, over 500 Vermonters marched the streets of Montpelier to demonstrate their support for the pro-life movement. The demonstration eclipsed the pro-abortion Women’s March of the week before by hundreds of participants.

RELATED: March for Life eclipses Women’s March in numbers, but not media coverage

Former Republican candidate for U.S. Senate Lawrence Zupan was among those who spoke Wednesday night. He said while he didn’t expect to convert anyone from pro-choice to pro-life, H.57 tests the boundaries of what even a pro-choice person might consider acceptable.

“Abortion is made legal for any reason, at any time with no restrictions or parental consent, up to and including during labor,” he said.

He highlighted that there’s no protection for a baby born alive from a botched abortion, and no restrictions on the dismemberment and sale of body parts to labs for research.

Nancy Thorpe of Waterbury shared health statistics regarding abortion in an attempt to persuade lawmakers.

“It’s easy to dismiss it when you think it’s just a blob of cells, but by day 22 that blob has its own heart that is beating with its own blood and blood type,” she said. “Most women don’t even know that they are pregnant at this point.”

She continued that the brain of a fetus is developed by week 6 and all organs by week 8. Furthermore, the fetus can feel pain by week 11 and dream by week 17.

Jennifer Hoult of Wallington was for the bill. She talked about how access to abortion is, in her view, guaranteed by the U.S. Constitution.

“The Eighth Amendment prohibits the cruel and unusual punishment of government-compelled reproductive enslavement,” she said. “Without these rights, women are slaves.”

She added that, according to her views, the soul is not part of the baby at conception.

Melina Moulton of Huntington said the lack of access to a safe abortion compromised the health of her mother, ultimately leading to her death.

“My mother’s life was horrifically compromised because she did not have access to safe legal abortion,” she said.

She said her mother had given birth to a child who was later adopted, but the birth did not go well and she died from subsequent complications, when Moulton was just 12 years old. She maintains that were abortion legally an option at that time, things could have turned out differently.

Dwayne Tucker of Barre Town took issue with the fact that there’s no parental notification in the bill.

“This means that your daughter or niece or someone that you might care about greatly, legally no matter what age, may get an abortion without notifying a legal guardian or a parent — let that sink in,” he said. “Were you capable of making that decision without any guidance or support from an adult you trusted at the age of 15?”

Annisa Lamberton of Middleton Springs talked about her regretful experience with abortion.

She explained in detail that she could feel her child fighting for its life during her abortion.

Rita Clark of Fletcher shared her pro-abortion message with the committees.

“This bill does not restrict their rights or their beliefs, it includes them,” she said. “I do not want to tell opponents of this bill what to do, and I do not want them to tell me what to do. This bill protects my rights and my freedoms.”