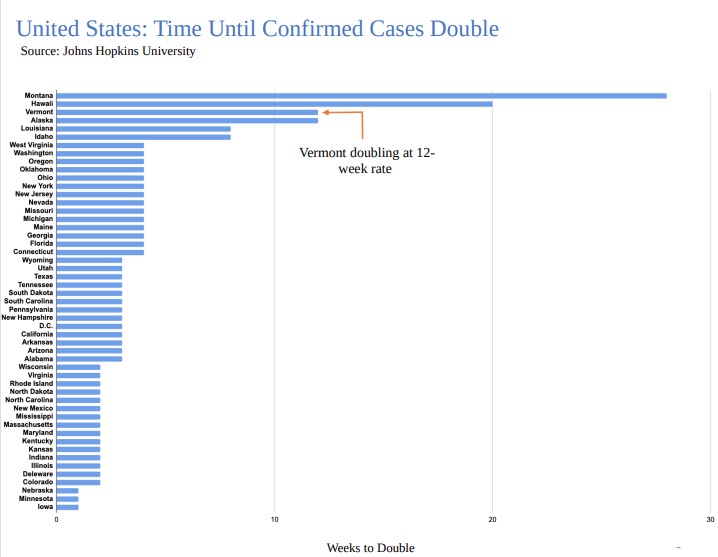 Vermont is forecast to have the third-slowest COVID-19 case growth rate in the nation, ranking behind only Montana and Hawaii, modeling released today by the state of Vermont indicates.

According to new forecasting prepared by Johns Hopkins, Vermont’s COVID-19 cases will double in 12 weeks. Only Montana (28) and Hawaii (20) show slower growth rates. Vermont is the slowest in New England, contrasting most sharply with Massachusetts (two weeks).

The encouraging forecast was released before Gov. Phil Scott’s scheduled 11 a.m. press conference, at which he opened by saying that vigilance is needed but more economic and recreational activities will be opened up next week. The prediction that Vermont is unlikely to experience a notable surge this May, June and July may prompt more calls for Gov. Scott to move more quickly on restoring economic activity. To date his “reopening the spigot” has been in carefully measured and monitored steps. 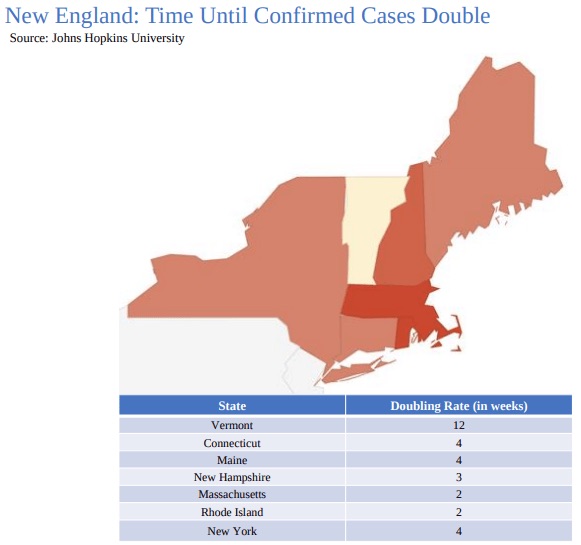 The forecasting also shows that Vermont’s actual results show far fewer cases, and a slower growth rate, than even the “best case” scenarios from March and April. 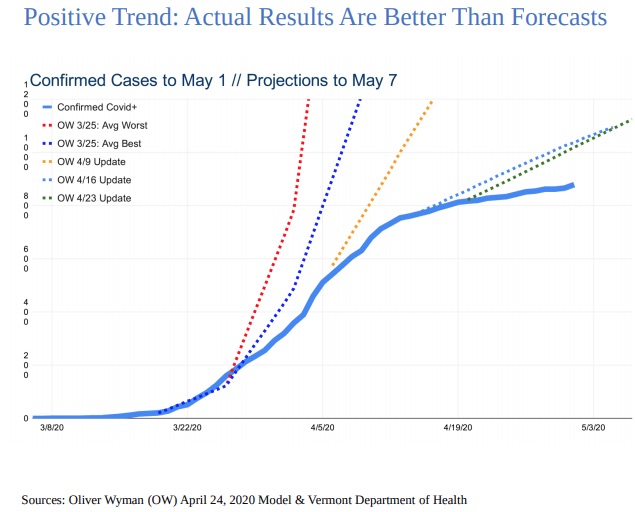 Senate to vote on $60 million of ‘hazard pay’ – In other COVID-19 related news, the Vermont Senate is scheduled today to vote on S.346, allocating $60 million of federal recovery funding on so-called “hazard pay” for essential front-line workers, especially those in retail stores, groceries, pharmacies, and health care facilities. Full-time workers will receive grants of $1,000 for May and $1,000 for June. Part-timers will receive $600 each month.

At a caucus yesterday, some senators said they hope the monthly grants will discourage workers from staying unemployed and collecting state unemployment and the $600 weekly federal payment.

These federal funds cannot be spent to backfill lost budget revenue for 2020 or next year. The State of Vermont faces an estimated 2020 revenue shortfall of about $200 million and up to a $430 million shortfall.