Lawmakers from Vermont want to close the so-called bump stock loophole, but gun owners in the state say the effort would have little impact, other than to give government more control over guns.

In the aftermath of the Las Vegas mass shooting, U.S. Sen. Patrick Leahy, D-Vt., and U.S. Sen. Bernie Sanders, I-Vt., signed on to sponsor the end of the sale of bump stocks.

Currently, the National Firearms Act allows gun owners to purchase a bump stock, and similar devices, for semiautomatic weapons, enabling them to fire at the same rate as automatic weapons. 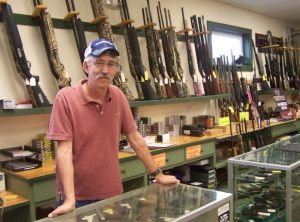 According to a news release signed by the bump stock bill’s sponsors, the legislation would “ban the sale, transfer, importation, manufacture or possession of bump stocks, trigger cranks and similar accessories that accelerate a semi-automatic rifle’s rate of fire.” Hunting accessories would be exempt, as would devices used by law enforcement and the government.

On the day following the Las Vegas killings, Sanders was among the first to politicize the tragedy.

“Last night’s attack is the deadliest mass shooting in our country’s modern history, and this year there have been more mass shootings than days in the year. In light of the terrible tragedy in Las Vegas and mass shootings across the country, it should be clear to all that we have got to do everything we can to stop guns from falling into the hands of people who should not have them. It is long past time for Congress to take action on gun safety to save innocent lives,” Sanders said.

U.S. Rep. Peter Welch, D-Vt., also weighed in on the tragedy: “What will it take to pass common sense gun laws that take guns out of the hands of people who should not have them?”

According to Republican U.S. Sen. John Cornyn of Texas, “If somebody can essentially convert a semiautomatic weapon by buying one of these and utilizing it and cause the kind of mayhem and mass casualties that we saw in Las Vegas, that’s something of obvious concern that we ought to explore.”

But Erich Pratt, executive director of Gun Owners of America, said in a statement that “it is disturbing to see anti-gun politicians and celebrities politicizing the (Las Vegas) tragedy by calling for further restrictions on guns.”

According to Evan Hughes, vice president of the Vermont Federation of Sportsmen’s Clubs, it’s too early after the Las Vegas shootings to make regulatory changes or enact new legislation.

“The Vermont Federation of Sportsmen’s Clubs has long held that laws should be based on sound pubic policy and in compliance with the state and federal constitutions. (For example), the gun control legislation that has been introduced in the Vermont Legislature in 2017 has not met these important standards,” he told True North.

Despite the flurry by Leahy, Sanders and others to enact a gun control measure, some Vermont gun owners appeared unruffled.

“We don’t have any bump stocks and don’t even order them,” said Vince Dattilio, owner of Dattilio’s Guns & Tackle in South Burlington. “We don’t have a thing to do with them. It’s just not something most Vermont gun owners and sportsmen are interested in.”

Bill Cleary, owner of Powderhorn Outdoors Sports Center in Williston, sells bump stocks but was not interested in talking about it. “I don’t talk to the media anymore about gun issues,” he said. “My experience is that reporters don’t treat the industry very respectfully. Someone in your profession ruined it for you a long time ago.”

“Semiautomatic rifles usually fire between 45 and 60 rounds per minute but a bump stock boosts that rate to somewhere between 400 and 800 rounds per minute,” Boglioli said. “But we’ve actually never sold these things. And the AR-15 (semi-automatic) market has never really been our market anyway.

“We got some ARs in the store after Newtown, as a means to keep customers in the store, and it did bring in some new customers. No matter, hunters wouldn’t use bump stocks. They may increase the rate of fire but you can’t be that accurate with them. Maybe you can put up a fairly big target and see how fast you can unload your magazine into it. But remember that the military went to three-shot bursts because you have better control. That’s because the longer the rate of fire, the harder it is to keep it on target.”

Split on the issue 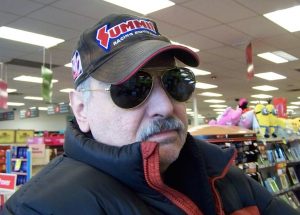 Retired NYPD cop Thomas Sinacore: “The government keeps whittling away our gun rights. …This is the government’s incremental way of controlling guns.”

“Well, I  personally have no need or desire to own a bump stock or a machine gun. It doesn’t make any sense to own one,” he told True North. “Machine guns, in general, are too expensive to buy and to shoot. But being a defender of the Second Amendment, I feel that if you want a bump stock you should be able to get one.

“Meanwhile, the government keeps whittling away our gun rights. Legislators keep circumventing the Second Amendment, first by controlling certain guns, certain kinds of bullets, (and) now these accessories. It’s all an excuse to control gun ownership. This is the government’s incremental way of controlling guns.”

Las Vegas mass-murderer Stephen Paddock used a bump stock to modify a semiautomatic rifle to fire like a machine gun. Paddock killed at least 58 concert goers and injured 489 others from the 32nd floor of the Mandalay Bay Hotel-Casino.

One Vermonter, Sandy Casey, 35, originally from Dorset, was killed during the shooting.