FERRISBURGH, Vt. — Two of Vermont’s top Republican leaders joined the party faithful at an ice cream social in Ferrisburgh on Wednesday, marking the kickoff of the 2018 election campaign for the GOP in Addison County.

Appearing at the River’s Edge Campground along the Otter Creek, Gov. Phil Scott and House Minority Leader Don Turner were on hand to summarize the legislative session, identify party challenges and raise funds for the next campaign season.

The men spoke at an open-air pavilion standing next to a water-logged cornfield. Both remarked that the sunshine was welcome after a week of rain storms and political wrangling that resulted in a state budget signed into law by Scott just a few hours earlier. 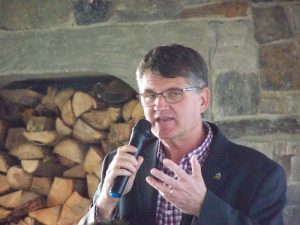 “While I wouldn’t want to be on any other team, we need a few more players,” Rep. Turner said in reference to the party’s minority status in state government. “We picked up some seats in 2016 … but there’s still a real imbalance in the Legislature.”

The Republican party holds 53 of 150 seats in the Vermont House of Representatives, just enough to sustain a governor’s veto without help from Democrats and Progressives. Turner said new leadership — including a new governor, House speaker, and Senate president pro tem — has brought real change to Montpelier.

Earlier Wednesday, Scott signed the fiscal year 2018 budget into law with no new taxes or fees imposed. Scott had vetoed the budget three weeks earlier because it didn’t include a satisfactory way to save taxpayers $26 million related to an upcoming change in teachers’ health care plans.

Turner said it was the first budget to be passed without new taxes and fees since before Peter Shumlin became governor in 2010.

“Spending, tax increases and new fees … that was the only thing the former administration knew how to do,” Turner said. “Every time we went back to Montpelier, hundreds of millions of dollars in new taxes and fees were hitting you and your wallet, and with no sign of turning that corner. … This year we turned that corner.”

Turner thanked Scott for setting an example of being both respectful and maintaining a calm demeanor as head of state, and concluded by pumping up the audience with a plea for more Republican candidates, especially from Addison County.

“It’s not too early to think about new candidates,” he said. “We need candidates starting today, not next May. We need more women, more young people … I see a lot of gray hair at GOP gatherings. I have gray hair, I like gray hair, but we need younger people to get involved.” 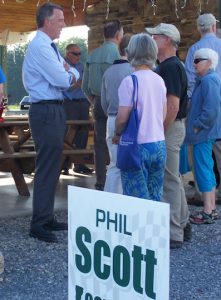 After receiving the microphone from Turner, Scott thanked  guests for their support and said successful governance is a team effort.

“We assembled a great team in January,” Scott said. “I followed the four Cs, just as I do with my business and auto racing teams: I look for character, competence, commitment and chemistry. You can have the smartest people together in a room, but if there’s no chemistry, it’s not going to work.”

He said while he was pleased to sign the state budget, federal cuts looming in autumn could cast a pall over Vermont. “We rely heavily on federal funds in our budget and that’s just a fact — a small change could have a drastic effect on us,” he said.

Like Turner, Scott made an appeal for new candidates to step up and run for state office: “We need younger people and women.”

Following the presentation by the party leaders, Addison County GOP Chairman Jon Christiano, of New Haven, said that he, too, sees lots of “gray hair” at Republican gatherings, but he added that he’s hopeful about future races.

“Just prior to the 2016 election we conducted a survey in parts of Addison County, including the towns of Ripton, Hancock, Salisbury, Leicester and Whiting,” Christiano told True North Reports.

“We asked respondents if a Republican candidate appeared on the ballot, would they consider voting for him or her? I am happy to say that 72 percent said ‘yes.’ That’s an encouraging sign to me, but our big challenge now is to attract the candidates,” Christiano said.

One thought on “Vermont GOP leaders take stock of session, raise funds for 2018”