Vermont farmers, long the target of environmentalists concerned about high-phosphorous runoff into the Lake Champlain basin, are aware of the enormous cost of cleaning up the lake. Many still talk about Vermont Treasurer Beth Pearce’s January 2017 announcement of a multimillion-dollar annual clean-up funding plan that would take 20 years to fully realize.

More than 40 people participated in a bus tour of the East Creek watershed in Addison County recently, including members of the Vermont Legislature, staff from UVM Extension, and local, state and federal agency personnel.

Estimated to cost in excess of $1 billion by the year 2037, Pearce’s plan, titled “Clean Water Report,” is still the Scott administration’s blueprint for getting the lake back on track. The Pearce report was mandated by Vermont’s Clean Water Act.

“Clean water is a shared resource, belonging to all Vermonters,” Pearce said when she unveiled the report last year. “We swim, fish, boat, drink and appreciate the beauty of our rivers, streams, lakes, ponds and wetlands. Clean waters are intrinsically linked to Vermont’s economic future.”

Alongside farmers, municipalities such as Burlington and Rutland are in activists’ crosshairs for recent failures at wastewater treatment plants that have caused millions of gallons of effluent to reach the lake.

But farmers are no longer taking environmentalists’ complaints sitting down. Instead, they’re taking an active role on the land and helping to improve water quality throughout the region.

As evidence of a growing consciousness-raising movement within the farming community around the lake, a recent water-quality-related bus tour event was held in Addison County. The October event helped showcase farmers’ efforts and sustainable farming techniques.

Hosted by the Vermont Agricultural Quality Partnership, the tour toured farms and watershed points of interest and focused on how farmers can help conserve watershed areas around the lake basin.

Attendees were receptive to the ideas demonstrated during the tour. Several farmers were front-and-center on the tour by talking about specific things they are doing around the barn and fields to improve local water quality.

The unusual bus trek specifically highlighted conservation efforts in the East Creek and McKenzie Brook watersheds. The two watersheds are located around the town of Orwell, which stands just east of Lake Champlain.

According to Ryan Patch, deputy of the Water Quality Division of the Vermont Agency of Agriculture, Food & Markets, more than 40 people participated in the tour, including members of the Vermont Legislature, University of Vermont Extension staff, and county, state and federal personnel.

On-location presentations and discussions at the tour’s watershed stops looked at the strategic approaches underway to improve water quality. The goal of the tour was to help Addison County farmers become team members with the state in reaching water quality goals.

The Partnership’s focus in working with farmers around the East Creek and McKenzie Brook watersheds is linked to the state’s “South Lake Champlain Basin Tactical Plan” completed a year ago. The plan outlines what has to be done to reduce storm water and farm runoff in the region.

Considering the 2017 “Clean Water Report” noted above, the cost of cleaning up Lake Champlain will not be cheap. The costs will be borne by state and federal taxpayers. And the costs borne more directly by farmers shouldn’t be ignored either.

“In Fiscal Year 2018,” according to a Vermont Agency of Agriculture, Food & Markets news statement, “Vermont farmers have invested almost $1 million in water quality improvements and equipment including 48 agricultural Best Management Practices with the Vermont Agency of Agriculture, Food and Markets. This includes implementation of agronomic practices on more than 7,000 acres of farmland to improve soil health and protect water from runoff.”

On the southern end of the lake on the Vermont side, the Partnership’s idea of conducting bus tours reinforces its mission to accelerate the state’s various water quality improvements. To get the job done is requiring collaborations in community outreach, notably education and technical/financial assistance directly with agricultural producers. 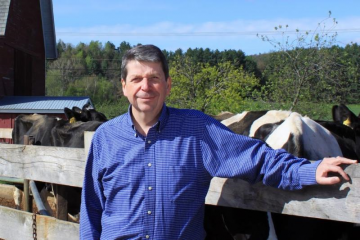 Among the attendees of the Addison County bus tour was Vermont’s Agriculture Secretary, Anson Tebbetts. Getting on and off the bus, he was afforded a look at several farms and their activities in the dual watershed around Orwell.

In order to advance its work about the lake basin, the Vermont Agricultural Quality Partnership must go beyond mere public relations. That’s why the Partnership has established its annual meeting program, now in full swing. The third annual Partnership meeting will be held in February.

Discussions and break-out sessions among colleagues at annual meetings are important, but when it comes to farming and water quality work, a hands-on approach is the best lesson when it comes to learning-by-doing.

“Through this water quality partnership, efforts to improve water quality are in full force. While we may not see the results of our work for some time, it is important to recognize and learn about all of the work being done,” he added.

Images courtesy of Scott Waterman and state of Vermont