Gov. Phil Scott is planning big improvements to the state’s infrastructure to accommodate electric vehicles, in addition to supporting further financial subsidies for Vermonters who wish to purchase these vehicles.

“Electrifying the transportation sector will help clean the air and keep millions of dollars within our economy,” Scott said in a recent statement. “While more work needs to be done, Vermont has taken strong steps toward a renewable transportation sector. Accelerating vehicle electrification will continue to be a priority of my Administration.” 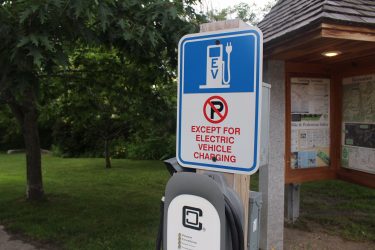 NO GAS ALLOWED: A charger station sits unused in Plainfield on a a busy Friday evening. Gas-powered vehicles are not permitted to park in this spot.

In order to achieve this, the state would need to have 60,000 EVs on the road in six years. Currently, Vermont has registered about 3,100 electric vehicles.

In this year’s budget, Scott supported the inclusion of $1.1 million to help low-to-moderate income residents purchase these cars. To qualify, the buyer must be at 160 percent below the median household income and the car must have a manufacturer’s suggested retail price of $40,000 or less.

This year’s transportation bill seeks to increase the adoption of charging infrastructure, including having charging stations charge per kilowatt-hour and maintaining the state’s Transportation Fund. The $1 million received from a nationwide settlement with Volkswagen over its violation of the Clean Air Act will be used for more charging stations.

Currently, Vermont has 26 Level 3 stations that can charge in 20 minutes, and 191 that charge in four hours. At least 30 more stations of both types will be added this year.

“As the biggest per capita contributor to climate change, the U.S. should be leading the way to rapid reductions in greenhouse gas emissions,” said Vermont House Transportation Committee Chair Curt McCormack. “Unfortunately, our federal government is doing the opposite. We cannot depend on or wait for Washington to act. It is going to take the states to lead this effort,” he said. “Governor Scott has provided such leadership, most recently with his electric car incentive and charging station initiatives.”

Electric vehicles continue to be highly subsidized by the federal government. The Qualified Plug-in Electric Drive Motor Vehicle Tax Credit is the primary subsidy, providing up to $7,500 to new EV purchasers as long as various vehicle standards are met.

The subsidy — which must be used on a plug-in all-electric or a plug-in hybrid model —  is applied to the first 200,000 EVs sold by the manufacturer for each calendar year. This is in addition to state subsidies including the aforementioned $1.1 million from Vermont’s budget.

In addition to the economic challenges of EV adoption, the vehicles cause environmental concerns as well. Vehicle batteries rely on cobalt, a rare earth mineral. One of the most abundant sources of cobalt in the world is in Congo, a poor and unstable country known for poor working conditions.

A 2016 report by the Washington Post says an estimated 100,000 cobalt miners in Congo “use hand tools to dig hundreds of feet underground with little oversight and few safety measures.” It also notes that “deaths and injuries are common,” and that the mining activity “exposes local communities to levels of toxic metals that appear to be linked to ailments that include breathing problems and birth defects.”

J.T. Dodge, of Newbury, is an outspoken opponent green energy mandates, including the carbon tax. He said cobalt is a serious dilemma at the heart of electric vehicle production.

“The fact is that the Chinese own the majority of the cobalt over there and they are paying slave wages, which essentially looks like enough to eat for a day for a child,” he said. “And there they are working just for enough to eat, and that sounds an awful lot like subsidizing the mining of their cobalt, not to mention the conditions are horrendous.”

Another factor to consider about EV adoption is the net green impact of the cars compared to the gasoline counterparts. A 2014 study by the University of Minnesota found that just because a car is using electric power, that does not make it “greener.”

11 thoughts on “Vermont doubles down on electric vehicle push despite costs, environmental impact”