A new report from the Harvard University John F. Kennedy School of Government says cars are bad, bad, bad for the economy. How bad? In Massachusetts alone, the study says, the “car culture” costs residents $64 billion per year.

Just how inefficient, you ask? Well get this: According to Harvard Kennedy School, Massachusetts pays about $16 billion — that’s $14,000 per household, car-owning or not — just to keep roads paved and safe: 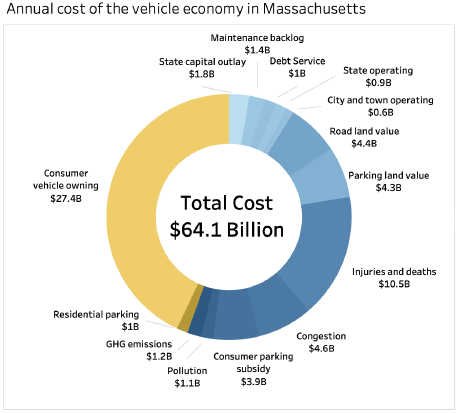 And medical bills for asthma attacks induced by exhaust fumes. And added consumer costs because convenience stores must buy, maintain and pay taxes on their parking lots. The cost of same on your driveway and garage. And the usual fees, purchase costs, license and registration, please. It’s all toted up, courtesy of Harvard Kennedy School. As Sen. Everett Dirksen of Illinois said, “a few billion here, a few billion there, and pretty soon you’re talking about real money.”

Kennedy Harvard School argues that by contrast, the cost of public transportation is chump change. Pay $50 million for public transportion upgrades? Raise taxes for millions in appropriations for bus and train fare subsidies? By comparison, any number that starts with M and not B looks like a good deal. In Vermont, for example, it will cost up to $96 million (that’s million with an “m”) to make the railroad tracks between Montpelier and Barre safe for David Blittersdorf’s diesel-powered, self-propelled commuter rail cars.

Still, frugal Vermont taxpayers may object to paying more for public transportation every successive year as climate-minded policy makers wage war on Vermont’s “car culture.” According to climate warriors, those unhappy Vermonters just don’t understand that the real cost driver is sitting in their driveway — and in their neighbors’ driveways. But given time and enough “public education,” they will. Following Harvard Kennedy School’s lead, proponents for costly anti-car initiatives will argue, “sure it’s expensive, but cars are even more expensive. Look how much money you’ll save in the long run!”

To which car-driving Vermonters might argue: vehicle mobility makes money, too. And for many, the price is worth the candle.

That convenience store owner needs deliveries by truck. Without roads, how will he stay in business? A parent must get to work, school, the doctor, and the market. Unless she lives in an urban “sweet spot” promptly accessible by foot, bike or PT to every necessary and desirable destination, how will she thrive, not to mention survive? The planners see that problem. Their solution is to spread the sweet spot to virtually everywhere. They want to 1) limit isolated rural development and 2) increase public transportation.

And there’s lots to be said for public transportation. Buses now run between Jeffersonville to Burlington, and Montpelier is a hub with spokes to Northfield, St. Johnsbury, Burlington, and Morrisville.  On the bus, a Montpelier resident can get to his minimum wage bakery job in Northfield. Without the bus, he wouldn’t have the job, the bakery wouldn’t have the worker, and eventually the customer wouldn’t have the bread. And with Vermont’s pricey cost of housing, low-income workers often must choose between paying for a car and paying for a roof.

But let’s not throw out the baby of vehicular freedom and prosperity with the bathwater of climate change. Of course it costs money to run the roads, both to individuals and to the taxpaying public. But for many Vermonters — especially those living in the poorer, less politically-powerful rural areas — life would be less prosperous and enjoyable without cars. Vermont policy makers might instead encourage affordable, market-based solutions. Let the affordable electric car market develop. Promote carbon credits for working Vermont forests. Support existing low-cost, carbon-free hydro and nuclear power.

But instead, some legislative leaders want to go all Greta on us, heedless of the consequences. Not all — both House Speaker Mitzi Johnson and Gov. Phil Scott both have expressed some willingness to pump the brakes (pardon the blasphemous vehicular reference). In the long run, the choice is up to the voters.