The Vermont State House will be closed, beginning Monday Oct. 28, for about three weeks, because the building’s power must be shut off to facilitate the installation of a new, battery-powered emergency power system.

The doors will be locked. Signs posted outside will explain why the building is closed, and redirect visitors to other sites for planned meetings and alternate worksites. 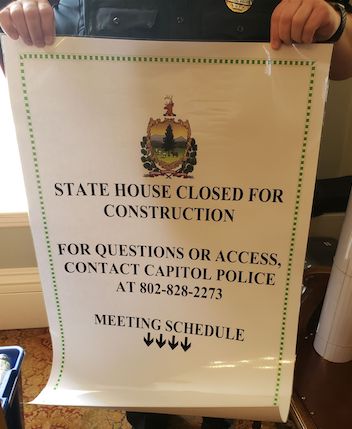 The renovation will include rewiring for a backup generator to the backup battery. Selective re-painting also will take place throughout the State House, including in some committee rooms and in the governor’s ceremonial office.

During this shutdown, year-round State House staff will work from state office space in the National Life building and in other state offices. Scheduled legislative “study committee” and citizen meetings will be re-scheduled to other locations in and outside Montpelier. Rescheduling information is available on the Vermont State House website.

The planned shutdown is believed to be the longest in State House history, for any reason, at least since the beginning of the 20th century. This may be due in part to specific language in Chapter II, Article 8 of the Vermont Constitution: “The doors of the House in which the General Assembly of this Commonwealth shall sit, shall be open for the admission of all persons who behave decently, except only when the welfare of the State may require them to be shut.”

Most years, the State House closes for just a week of cleaning and rehab during the off-session months of June – December. It is the all-day, year-round workplace for Legislative Council staff, police, the sergeant-of-arms office, cafeteria workers, and some legislative staff. As the state’s pre-eminent museum of government art and history and as a scenic, convenient lunch-and-bathroom stop, it’s also popular with tourists.

The new battery backup system will be located in the State House basement. It will replace a decades-old fuel-powered generator, powered by a flathead engine. The idea for replacing the existing generator with a new battery backup emerged during discussions of the House Corrections and Institutions Committee, which has legislative oversight over Vermont buildings. A power outage during a June veto session two years ago was handled ably by the existing generator, but nevertheless may have raised concerns about longterm solutions to State House power outages.

According to Capitol Police Chief Matt Romei, the new battery system will deliver eight hours of maintenance-level power. If the elevator — part of the essential evacuation system — is needed, the power won’t last as long. The renovation will include rewiring for a backup generator to the backup battery. Selective re-painting also will take place throughout the State House, including in some committee rooms and in the governor’s ceremonial office.