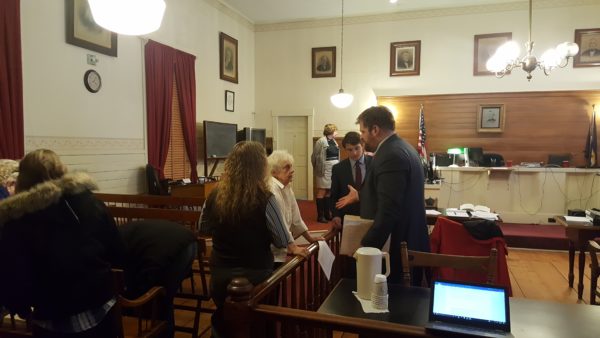 SMALL TOWN DRAMA: Carol Easter, town clerk-treasurer for Victory, Vt., gets advice from the town’s lawyer, Daniel Richardson. She is a defendant in a case that accuses her and her neighbors of participating in voter fraud.

GUILDHALL, Vt. — Three judges at the Essex County Superior Court on Tuesday postponed an April 5 run-off election in the town of Victory, saying absentee ballots weren’t made ready 20 days ahead of the date as required by statute.

The judges’ ruling came after a lengthy hearing over a complaint and mandamus petition filed by attorney Deborah Bucknam on March 21.

“With respect to the challenge to the March 7 [Town Meeting Day] election, clearly there has not been enough opportunity for all parties to be heard with respect to that,” Judge Elizabeth Mann said.

Lionel and Carol Easter are among 18 defendants named in the lawsuit. Some of the defendants are not Victory residents and are being accused of participating in a “massive voter fraud.”

The two candidates competing in the upcoming run-off are Lionel Easter and Otis McKennistry, who tied in their Selectboard race on Town Meeting Day.

The plaintiff in the case, Tracey Martel, also ran for election on Town Meeting Day. She lost the town clerk and treasurer races to Carol Easter by fewer than four votes. Martel is contesting those results.

The lawyer for the town of Victory, Daniel Richardson, acknowledged that there should be a proper review of the Town Meeting Day election.

“Certainly, if there was evidence of misconduct that merited a town-wide recount, I believe the town would be the first to say let’s do it over again,” he said. “Ultimately, the court’s authority to do so rests on the evidence.”

A more serious concern than failing to prepare absentee ballots, the March 21 complaint alleges that “numerous non-residents who are political allies of the individual defendants have been placed on the voter checklist, and voted by absentee ballot in the March 7, 2017 election.” The judges made no determination on the merits of that allegation.

Martel and Bucknam believe that in addition to absentee ballots getting sent out to non-residents, Carol Easter prevented absentee ballots from going to legitimate voters. Witnesses called by Bucknam indicated that they or their family members were refused ballots. Some said Easter intentionally made absentee ballots difficult to obtain.

Ruth Neborsky, a resident of Victory, testified Tuesday that Easter refused to give absentee ballots to her two sons because she would not offer their home addresses, which are out of state for college and the military. Neborsky said she does not want her sons’ addresses available at town offices because the family has received threatening messages regarding one son’s military service.

After one of Neborsky’s sons did obtain the ballot, he was unable to submit it in time for Town Meeting Day. Carol Easter said that it was the sons’ responsibility to get the ballots returned on time.

At Tuesday’s hearing, Bucknam explained the alleged 20 days violation that preceded Town Meeting Day. “There was testimony that the absentee ballots from the March election weren’t ready until Feb. 22. The March election was on the 7th, so that’s less than 20 days,” she said.

In a telephone interview Wednesday, Carol Easter said the ballots were ready by Feb. 16, or 21 days before the March 7 election — just in time to beat the 20-day limit.

Easter criticized Bucknam, saying, “This is going to be lawsuit number six that she has been the lawyer for this group.” She added that lawsuits cost taxpayers money as the town lawyer has to work on each case.

Bucknam said at the hearing that families living outside of Victory were given ballots merely on the stated intention to move to the town, even when the move might be questionable. Meanwhile, legitimate registered voters were being kept from voting.

“Here they are taking an actual resident, Ruth Neborsky and her sons, off the checklist, and at the same time putting on the checklist someone who lives in Connecticut,” Bucknam said.

The judges determined that the town’s voter checklist must be reviewed and purged of those who no longer qualify to vote. Bucknam argued that the checklist is so filled with ineligible names that the town’s population would have had to increase by 50 percent since the 2010 Census — an unlikely scenario.

At the hearing, Carol Easter agreed that the checklist should be reviewed. “It needs to be purged. It needs to be looked at,” she said before the judge.

On the issue of possible fraudulent votes cast on Town Meeting Day, judges said the ballots from that election will be sealed until a further determination is made. Decisions about purging the checklist and the run-off election are expected by May.