A child tax credit bill first introduced in the Vermont House of Representatives last month moved one step closer to reality after passing on a third reading.

The legislation, sponsored by state Rep. Janet Ancel, D-Calais, would create a refundable child tax credit of $1,200 for children age 6 and under. As proposed, half of the credit would be paid out to Vermonters in monthly payments, and the other half would be paid when an income tax return is filed. 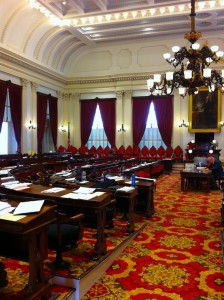 During a legislative session Feb. 9, the House passed the bill on third reading, forwarding it on to the Senate, where it was read for the first time on Feb. 11 and forwarded to the Committee on Finance.

The bill, H.510, was first read on the House floor on Jan. 7 and subsequently went through several committees within the legislative chamber, including Ways and Means and Appropriations.

During a legislative session Feb. 9, the House passed the bill on third reading, forwarding it on to the Senate, where it was read for the first time on Feb. 11 and forwarded to the Committee on Finance.

H.510, as drafted, includes several caveats, including provision subtractions to the base child tax credit be made for individuals with AGIs exceeding $200,000.

State Rep. Rob Laclair, R-Barre Town, made several unsuccessful attempts to amend H.510 prior to its adoption at the Feb. 9 legislative session, including lowering the threshold for the subtractions from $200,000 to $100,000.

“Looking at statistics from the tax department, over 70% of Vermont household incomes are underneath the $100,000 threshold,” Laclair said. “It seems the $200,000 was targeting the wrong folks.”

Additionally, Laclair proposed an amendment into H.510 that also was defeated: a proposed $925-per-child tax credit for any residents working as nurses and nursing assistants. Laclair touted the proposal as a recruiting tool for a profession grappling with labor shortages.

“If you had a nurse come to Vermont, and they had two or three children, that could make the difference,” Leclair said.

State Rep. Mari Cordes, D-Lincoln, serves on the House Committee on Health Care. She acknowledged the labor shortage but suggested a different course of action on recruitment.

“We are taking extensive testimony on the workforce crisis,” Cordes said. “I think it would be wiser to continue discussion of which tools we should use to address the crisis.”

State Rep. John Bartholomew, D-Hartland, said he also was in favor of keeping the bill in its original state.

“This bill has a very narrow scope. It creates a Vermont tax credit, and it excludes a part of Social Security from taxable income for many Vermonters,” Bartholomew said. “But I don’t believe the bill allows for the numerous potential amendments for other tax credits or exclusions, so I do not believe that this amendment is germane.”

The Vermont Legislative Joint Fiscal Office, a state agency, has crunched the numbers on the bill and its potential impact on the bottom line of the state budget.

“JFO estimates this bill will decrease state revenues by $49.7 million in fiscal year 2023,” Graham Campbell of the JFO wrote in a fiscal note. “These changes will affect personal income tax collections, and therefore, the general fund. The cost of this bill is expected to increase by $100,000 per year after FY 2023.”