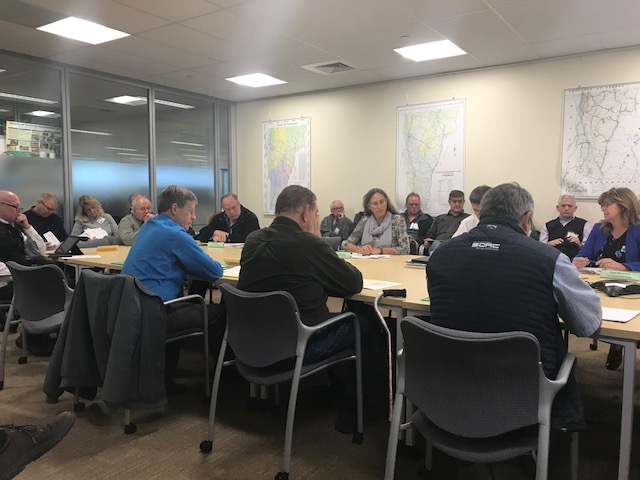 MONTPELIER — Leaders in aviation from the public and private sectors met last week at the National Life building to discuss how to manage aviation projects with limited time and resources.

“We have to be prudent in how we manage the finite state dollars that we have,” Joe Flynn, secretary of the Agency of Transportation, said at Tuesday’s meeting. “Whether it’s transit rail, aviation, highway, DMV … we have a lot of need and we have a finite amount of dollars.”

With the Agency of Transportation facing state budget cuts, the aviation division stands to lose $300,000. Flynn said those dollars have to be managed prudently, and that means working with the Federal Aviation Administration for grants and matching federal funds.

But according to some airport owners at the meeting, breaking ground on new projects requires jumping through many hoops.

“We have the demand right now, and if we don’t handle that demand now, we may lose an opportunity,” Russ Barr, owner of Stowe Aviation, said.

Barr wants a runway extension of about 300 feet at the Morrisville-Stowe State Airport to get more flights and more economic activity happening in his community. But if it’s to get going in the 2018 construction season, the environmental studies are due at the end of this year — which may not happen.

“I just want to know if there’s something we can do as a team to feed the FAA with the information so that they understand this is not something that necessarily should go on the back burner,” he said.

Barr said while he acknowledges the state may have reservations about moving ahead on projects without knowing how much federal support it will get, there is risk involved in moving too slowly.

“What is being risked right now is private money trying to run parallel to state money so that everybody’s investment gets realized,” he said. “If the state doesn’t run that side and private runs that side, private is almost guaranteed to lose millions of dollars.

“And that is my and my investors’ real money, that’s not someone else’s money. So, you can understand why it is extraordinarily important.”

“We employ 22 people, we’re probably the second or maybe third busiest airport in the state during the summer. We drive a tremendous amount of economic (activity) for the Warren-Sugarbush area,” he said.

Anderson took issue with the job description for the still-vacant Agency of Transportation’s aviation division. He said there is no mention of economic development in the description.

“(There is a) lack of connection on economic development, of spending the dollars where they directly benefit a company or group of companies that are on an airport. That disconnect in that job description is really telling.”

Trini Brassard, special projects manager at the Agency of Transportation, told True North in a separate interview that infrastructure improvements are happening at a decent pace, and now they are shifting focus towards economic development. She added there needs to be more community outreach.

“What we haven’t done a good job in is promoting how this is going to help local communities and businesses,” Brassard said. “For example, we have a freight service that comes out of a lot of the airports, and I’m sure that a lot of the businesses which move stuff aren’t aware that there is air-freight service right there at these airports.”

She addressed the frustration airport owners are having over the pace and availability of state aid.

Also at the meeting was Guy Rouelle, the prior head of the state aviation division. Rouelle left in June after six years with the state to start the newly formed Vermont Aviation Management Association, which advocates for industry interests. He told True North before the meeting that VAMA could accomplish many things for aviation in Vermont from the private sector.

According to VAMA’s Facebook page, VAMA is “an aviation advocate in state and federal arenas, protecting the regulatory and legislative interest of aviation and airport facilities.” The group seeks to influence aviation-related decisions at the government level.