The Vermont Agency of Transportation on June 19 instructed employees to not remove murals, signs or graffiti in the highway right-of-way unless profane, grotesque or dangerous to traffic, according to two agency memos.

The action represents a reversal of the longstanding policy of removing or painting over graffiti and other messaging. The policy change was made after guidance from the governor’s office, and was in response to a complaint from a protester whose chalk-written messages on the VT-30 bridge in Jamaica were erased. One message said “No Justice, No Peace,” and the other listed names of black people killed by police and others.

The existence of the two memos surfaced during Gov. Phil Scott’s press conference Monday.. At Vermont Daily’s request, AOT spokesperson Amy Tatko provided the memos, which are printed below. 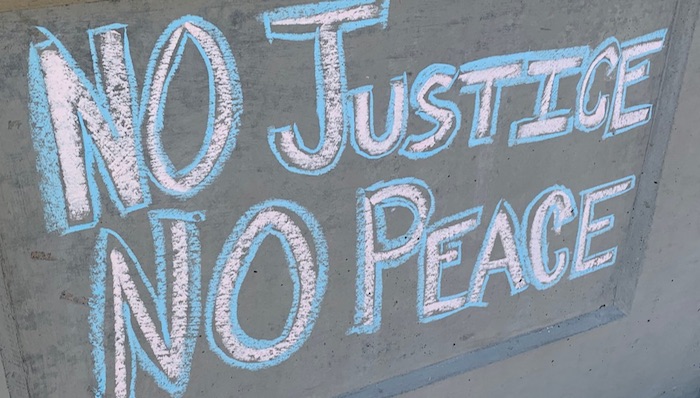 After a complaint from the author of this message written in chalk on a bridge on Route 30 in Jamaica, the Agency of Transportation decided Friday, June 19 it will not remove any road or bridge messaging, sign or graffiti unless profane, grotesque, or unsafe. (AOT photo)

“Connie [Englert, AOT General Manager of Highway Maintenance and Operations] reported to a handful of us this morning that some chalk messages (see photos) on the VT-30 bridge in Jamaica Village were cleaned up per standard VTrans practice. I then received a call from someone in Jamaica involved with putting up those messages who wished to learn why we had removed them. After discussions with the governor’s office, the policy is changed, effective immediately:

“When I talked with the person in Jamaica, he told me that his group has already written the message in chalk again. I assured him that it would remain in place this time.”

An hour and a half later, AOT Chief Engineer Wayne Simonds emailed a follow-up message clarifying and expanding somewhat on Tatko’s email:

“First, I appreciate the work you have been doing to carry out previous guidance for the removal of unauthorized “murals” (graffiti, messages and tagging) and illegal signs.  You and your staff have done exactly what was required and asked.  However, we are in ever changing times and we must recognize that and adapt.  So effective immediately,  I ask you now to evaluate the content and situation of any mural or sign in the highway right of way before deciding to remove or paint over them. Guidance:

For murals painted on bridges and walls:

The Jamaica messages were written in chalk, which is easily erasable and is washed away by rainfall. However, the policy change goes beyond just permitting chalk. It specifically allows paint, presumably including permanent paint and spray paint.

Although the new policy seems to indicate that messages on other topics will receive the same lenience, Vermont Daily last night asked Tatko to clarify: “Does the new policy apply to other non-profane, etc. statements – such as Blue Lives Matter, All Lives Matter, Jesus Saves, Save the Whales, etc.?” As of yet no response has been received.

It is also not clear how this new policy complies with Vermont’s billboard law, which bans most roadway messaging and in the words of the Vermont Natural Resources Council “is a strong step in creating road corridors free of visual clutter.”