Incumbent state Rep. Warren Van Wyck was looking forward to retiring from his time at the Statehouse — that is, until he realized no other Republican was running to take his place.

In a last-minute change of heart, the three-term incumbent decided to run as a write-in candidate and won the Republican primary with just 105 votes. 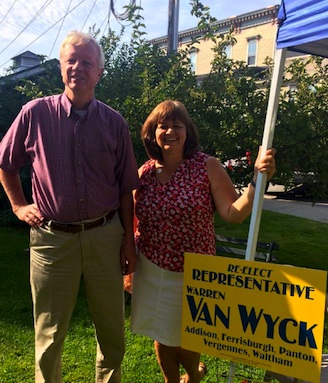 NO ONE ELSE: Rep. Warren Van Wyck, R-Ferrisburgh, pictured standing next to his wife, Jeanette Beenen Van Wyck, decided to run for a fourth term after the GOP failed to field a replacement candidate.

“People expressed desire, and constituents said that they were sorry I was not running, and they asked why not.” Van Wyck told True North. “The week before the primary I was taking [outgoing House Minority Leader] Don Turner around the Addison County Fair and he explained the need for balance in the legislature.”

As the veteran lawmaker remembers it, he and his wife were discussing the issue just days before the Aug. 14 primary and felt a duty to continue to serve their loyal constituents.

“We really felt strongly about the constituents that supported us,” he said. “We didn’t want to just give away a Republican seat and there was no other Republican running in the district, so we decided at that point to pursue it and have a write-in campaign.”

The Vermont GOP had trouble finding candidates this year. The issue was brought to the forefront when Republican H. Brooke Paige ran for several state and federal tickets in the primaries — and won them all. The candidate did so to prevent Democrats from placing their own candidates on the Republican ticket as write-ins.

“It’s a large commitment to have a campaign and be in the legislature for four and a half or five months a year,” Van Wyck said. “There are certainly work commitments — that’s one of the biggest factors we’ve heard when trying to recruit people.”

Van Wyck is unique in the Statehouse. For one thing, he doesn’t cave to peer pressure when it comes to voting and speaking out on controversial topics. This past legislative session he was one of just two lawmakers on the House floor to vote against S.281, which deals with “systematic racism” in state government. Van Wyck dared to challenge the popular liberal talking point that racism is rampant in Vermont’s highest offices.

Moreover, he has been one of the lone voices on the House Committee on Energy and Technology when it comes to opposing green energy policy.

“I am concerned about the rising cost of electricity in Vermont,” he said. “If you look at Green Mountain Power’s rate increases and the upward pressure on rates, that’s very concerning for businesses also.”

The high cost of going green has been especially visible with net metering projects in Vermont. These residential-scale solar installations allow homeowners to sell excess electricity back to the grid for a premium rate of around 19 cents per kilowatt-hour. That’s compared to just around 7 cents per kilowatt-hour for market-rate power.

“We also hear that from Green Mountain Power, and I’m sure Vermont Electric Cooperative is aware of it,” he said. “Because net metering, even now that the price has been reduced, it’s way above the market rates and it causes cost-shifting to other ratepayers.”

If former Vermont Electric Cooperative CEO Christine Hallquist wins the governorship, Van Wyck suspects his vote will be needed to help prevent another push by the majority party for their long-sought-after carbon tax.

“If Hallquist were to be elected, that certainly would be something that could come up because the Democrats have been proposing this in various forms for a number of years,” he said.  “I don’t expect that that would go away. It may just be renamed or reshaped, but certainly I believe that’s on the Democrat/Progressive agenda.”

Van Wyck sticks to the Republican talking points on economy and affordability. In particular, he would like to streamline the Act 250 permitting process to reduce the numerous hurdles for businesses.

He also expects to continue to push back against the $15 minimum wage and paid family leave agendas.

“We hear too much from businesses. Some of them aren’t even thinking about expanding in Vermont because it’s too difficult to go through permit processes and they are concerned about the continual renewal from the liberals and Democrats that they want to further increase mandates.

“When a business tries to expand it is hundreds of thousands of dollars getting through the permitting process, and at the end of it they may not even go,” he said. “But if it does go that cost gets passed onto the consumers.”

2 thoughts on “Rep. Warren Van Wyck un-retires, runs again after no one stepped up”