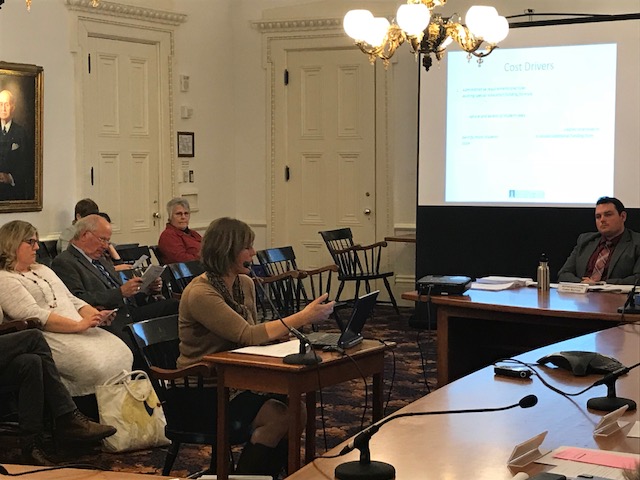 TOO MUCH FOR SPECIAL ED: Professor Tammy Kolbe of the University of Vermont speaks to a joint meeting of the House and Senate Education committees regarding special education funding in the state.

The central point of the study presented by professor Tammy Kolbe of the University of Vermont, was that Vermont spends roughly twice what other states pay per special education student. Kolbe, one of two authors of the report, said steps could be taken to improve the situation.

“We took those weights and we extrapolated based on the existing percentage of students with disabilities to create an average cost based on these weights,” Kolbe said. “Based on that, the predicted amount that we should be spending is about $11,033.”

The national average for special education spending per student is $10,138. New Hampshire pays $11,994 and Massachusetts pays $15,105. No other state comes close to Vermont’s spending amount.

Kolbe offered three observations for how spending got out of control.

“The first thing is that the administrative requirements in rules that define allowable costs for the state’s existing special education funding formula created inefficiencies,” she said.

In other words, when each special education dollar received from the state is highly restricted in where it can be spent, there’s not a lot of wiggle-room to be creative or adaptive.

“The second thing that we heard is that the nature of special ed student needs is growing more complex, and I expect that’s no new news to anyone at this committee,” she said.

A third concern, Kolbe said, is the current system incentivizes the classification of special education students. She was hesitant to criticize the development as she emphasized that this could just be a result of educators simply trying to address various needs.

“They see struggling students and they feel that it’s the only way that they can access supports for those students, so it is done in a very well-meaning way, so I want to be careful about that,” she said.

Addressing the first concern, she suggested that Vermont adopt some sort of block grant model — which she called it the “census-based funding mechanism” — where the money awarded to a school has few strings attached so schools can be flexible. Still, there should still be some level of accountability, she said.

“That’s the New Jersey model, which says ‘we’re going to give you X amount of dollars per pupil, but you need to demonstrate that at least 30 percent of those dollars are being spent on students with IEPs [individualized education programs],” she said.

“Now you could set that anywhere; that’s just what New Jersey decided.”

Another aspect of this plan is the way the awarded amount is calculated. In this system, the amount awarded is based on the total number of students in a school, rather than awarding the grants based on kids registered with IEPs. The aim is to discourage any trend of IEPs being assigned to obtain more state money.

Members of the committees questioned if this is the right solution for Vermont.

“If 70 percent can be used on other things, it seems like you have to assume that you are incentivizing a certain amount of that behavior,” said Sen. Philip Baruth, D/P-Chittenden, chair of the Senate Education Committee. “Now if some of this money is not used for special ed, then it can be used for a host of other things. So people begin to say things like, ‘We’ll really need that new roof … it would be great if we get by with this amount of money.’”

Other committee members had questions for Kolbe.

“The thing that bothers me is, I don’t hear anything about how we determine if our special ed children who are on IEPs now are, under this new plan, achieving their goals.” Sen. Carolyn Whitney Branagan, R-Franklin, said.

Kolbe answered that in this case nothing would change. The current systems in place for judging progress would continue to be the same.

Despite warning that money is not being used most efficiently, Kolbe said she does not want it to be taken as a call for austerity.

“This notion of spending too much is a slippery slope,” she said. “We spend a lot, comparatively speaking, to all the benchmarks that we could create. But those numbers are buying services for our students, and these are some of our most at-risk students.”