The U.S. State Department’s Diversity, Equity, Inclusion, and Accessibility (DEIA) Strategic Plan has sparked controversy for including taxpayer-funded “gender transition care” for employees and their children.

The policy comes as some states have begun banning those very same transgender surgeries and drugs from use on children, labeling them “child abuse.” 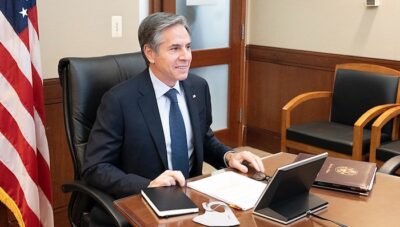 Secretary of State Antony J. Blinken at the U.S. Department of State

“The State Department might not just be paying for their employee’s kids to receive these damaging surgeries, they’re penalizing foreign service officers who disagree and pressuring countries to perform these procedures on children,” U.S. Rep. Jim Banks, R-Ind., told the Free Beacon.

“During my confirmation hearing, I said that I would judge the success of my tenure, in part, by how well I lead the Department to be more diverse, equitable, inclusive, and accessible,” Secretary of State Antony Blinken said after the plan was released. “Together, we will make the Department a more effective organization, better equipped to meet the challenges and opportunities of the 21st Century.

“Our country’s diversity is our greatest strength,” he added.

The plan commits that the State Department will “assess resources for gender dysphoria and gender transition care at posts for employees and their dependents.”

The agency will also “develop a Department-wide targeted plan to achieve equity in the advocacy plan to obtain the accreditation of same-sex spouses overseas” and “increase gender-neutral restrooms and locker rooms in overseas facilities.”

The plan says the agency will “evaluate and ensure inclusion and safety policies and procedures for LGBTQI+ children at overseas schools in collaboration with the educational accreditation agencies and provide mechanisms for social-emotional support.”

Republicans around the country have begun pushing policies to ban transgender surgeries and drugs from use on children.

“They need to get to be 18 before they make those decisions,” Republican Rep. Robin Lundstrum said at the time.

In August, the Florida Agency for Health Care Administration said the state’s Medicaid coverage would not pay for transgender drugs or surgeries. Florida’s medical board has begun reviewing transgender treatments for youth with the likely goal of banning them for those under 18 years old.

Tennessee is also foremost among the states after state Republican leadership said it is considering an outright ban on transition drugs and surgeries for minors.

Last month, allegations arose that Vanderbilt University was pushing the transition treatments to earn a profit and forcing out employees who disagreed after a video of the university’s medical center went viral. That video included a Vanderbilt University Medical Center doctor in 2018 touting that transgender surgeries “bring in a lot of money” and has further ratcheted up scrutiny on the issue in that state.

“We should not allow permanent, life-altering decisions that hurt children or policies that suppress religious liberties, all for the purpose of financial gain,” Tennessee Gov. Bill Lee, a Republican, said in a statement.