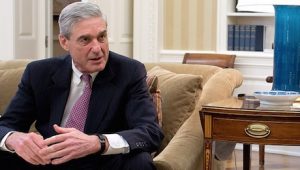 “As the special counsel’s report acknowledges, there is substantial evidence to show that the president was frustrated and angered by a sincere belief that the investigation was undermining his presidency, propelled by his political opponents, and fueled by illegal leaks,” Attorney General William Barr said Thursday morning. “Federal agents and prosecutors were scrutinizing his conduct. … There was relentless speculation in the news media about the president’s personal culpability. Yet, as he said from the beginning, there was in fact no collusion.”

“Apart from whether the acts were obstructive, this evidence of non-corrupt motives weighs heavily against any allegation that the president had a corrupt intent to obstruct the investigation,” he added.

Mueller described acts of potential obstruction of justice without reaching any legal conclusions. Barr “concluded that the evidence developed during the special counsel’s investigation is not sufficient to establish that the president committed an obstruction-of-justice offense,” he said at a press conference.

They included, according to the special counsel’s roughly 400-page report:

Mueller says when it comes to firing Comey, the “evidence does not establish that the termination of Comey was designed to cover up a conspiracy between the Trump Campaign and Russia. … The initial reliance on a pretextual justification could support an inference that the President had concerns about providing the real reason for the firing, although the evidence does not resolve whether those concerns were personal, political, or both.”

When it came to efforts that “involved his communications team and w[ere] directed at the press,” they would amount to obstruction “only if the President, by taking these actions, sought to withhold information from or mislead congressional investigators or the Special Counsel,” since the media are not government investigators.

Mueller noted that he could not definitively rule out that Trump had obstructed justice, saying the case presented “difficult issues.” He wrote: “At the same time, if we had confidence after a thorough investigation of the facts that the President clearly did not commit obstruction of justice, we would so state.”

Barr said Trump’s actions stemmed simply from frustration at being wrongly accused and that intent was key. “The president took no act that in fact deprived the special counsel of the documents and witnesses necessary to complete his investigation,” he said. “Apart from whether the acts were obstructive, this evidence of non-corrupt motives weighs heavily against any allegation that the president had a corrupt intent to obstruct the investigation.”