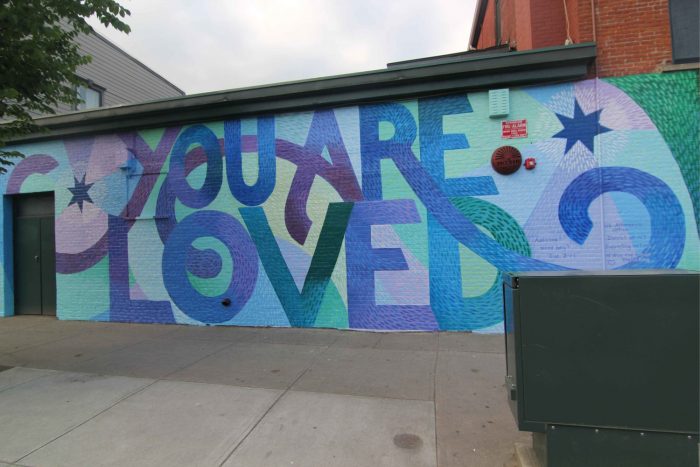 SPREADING THE WORD: Human trafficking is alive in Vermont and the U.S. Attorney’s Office wants people to become more aware of the issue. This Burlington mural’s two year anniversary was used to help remember those victims of modern-day slavery. (Photo courtesy of Alex Cook/YouAreLovedMurals.com)

BURLINGTON — Vermonters gathered Friday afternoon on Church Street to get an update on human trafficking in Vermont, and to remember its victims by marking the second anniversary of the “You Are Loved” mural, which was sponsored by the U.S. Attorney’s Office.

“Human trafficking is a monstrous crime,” U.S. Attorney Christina Nolan told the crowd gathered at the event. “It’s hard to believe that it happens here, but we have to acknowledge its presence here in our beautiful state, and there is hope because there is so much love in this community.”

“People from all professions are working together as never before to identify victims and rescue and support survivors, and prosecute the terrible perpetrators,” she said.

The mural, located across from the Ben & Jerry’s ice cream shop, was painted by professional and local artists. Nolan said even she helped with some of the painting. 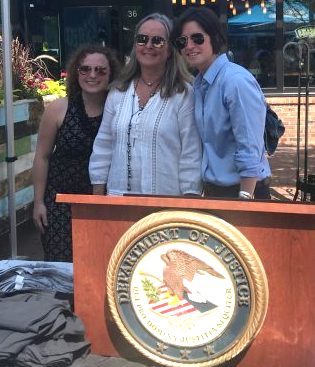 “What I’m hoping to do by having this commemorative event is to remind people that this crime is real, it’s happening, it involves forcing people to engage in commercial sex acts, and the perpetrators are making the money,” she said.

She noted it can be easy to overlook something as dark as human trafficking in a rural state known for tourism and outdoor beauty. However, a high profile case was successfully prosecuted last month in Burlington.

In May, federal prosecutors convinced a jury that Brian Folks, 44, was guilty of six human-trafficking charges, several felony drug charges, and another charge for running a prostitution business. The victims, including one child, were all from Vermont. Folks now faces up to 15 years in prison.

Nolan said the victims were vulnerable drug-addicted persons whom Folks approached and promised to give a better life.

“But then the control begins and the manipulation and the abuse, and before you know it they are being trafficked and coerced into having sex with strangers for money, and he’s taking all the money,” she said. “The abuse that went on was just horrific — rape, beatings, withholding drugs and other forms of terrible humiliation.”

Nolan described this as a landmark case in the fight against human trafficking.

“[The victims] bravely walked into the courtroom, testified about the worst forms of physical abuse and humiliation which were perpetrated against them, to force them to engage in commercial sex acts, and they did an amazing job. And the jury found him convicted of all human trafficking accounts, and it was a total vindication for the victims,” she said.

The case involved the combined efforts of the Department of Justice’s Civil Rights Division in Washington, D.C., the Drug Enforcement Administration, the Federal Bureau of Investigation, and local police.

Aimee Stearns, the victim witness coordinator for the U.S. Attorney’s Office, was at the event. She told True North what defines a human trafficking case.

“I think it can take different patterns, but it has to have certain criteria for it to be trafficking with is force, fraud, and coercion,” she said. “But that can look many different ways.”

She commented on what people should do if they suspect human trafficking in their areas of the state.

“If they see anything that seems sort of strange, they can call local law enforcement, who are being trained now in the signs of human trafficking, and just discuss it and see if it’s something that might be an issue.”

Nolan offered tips on what to look out for when coming across potential victims.

“[Look for] people who are skittish about what the nature of their relationship is with somebody else and won’t answer questions directly,” she said. “It almost seems like they are reluctant to say anything for themselves. These are signs of somebody who’s being controlled, being possibly abused.”

She said more tips are available at StopTheTraffik.org, and at the U.S. Attorney’s Office.

Nolan said the mural has been effective as her office has received messages from the public indicating they are proud to see it in Burlington.

She said there are likely more cases to come.

“We’re doing more cases than before, and I believe there are more cases to be done,” she said. “I know that there are victims right now that we need to find and we need to get connected with resources because this is an unbelievable nightmare and it’s really a form of torture, a way to enslave people in the modern era.”