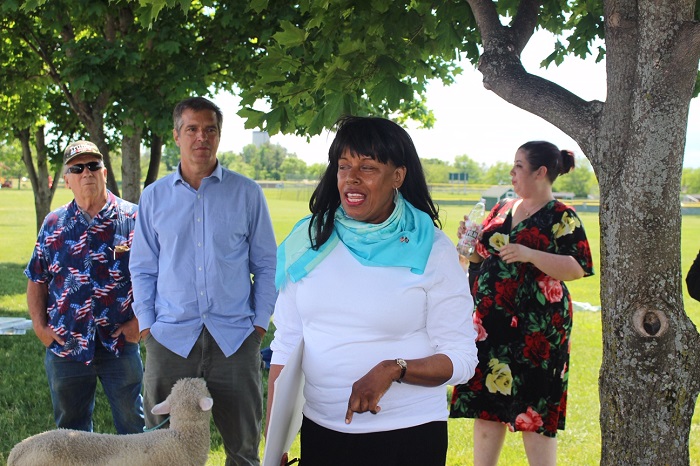 DOES NOT CONDONE VIOLENCE: Alice Flanders, a candidate for the House Windsor 4-2 District, speaks out against the killing of George Floyd and the subsequent violence by many of his  protest supporters.

Two House candidates are weighing in on the nationwide race riots that started after George Floyd, a 46-year-old African American, died of a heart attack when a Minneapolis police officer kneeled on his neck during an arrest.

Since Floyd’s death on May 25, the marches organized in his honor have turned violent, causing millions of dollars in damages in major cities. Even more killings have occurred amid the violence, leading the brother of the victim, Terrence Floyd, to call for the rioters stop and hold peaceful protests instead.

House candidates Alice Flanders and Levar Cole, two African Americans running as Republicans, shared their thoughts on what in happening in the country in aftermath of Floyd’s death.

“Once you have a suspect in handcuffs and the fighting back has stopped, then that is the end of that kind of response from the police,” Flanders told True North. “And that didn’t happen. Unfortunately, there were a few police officers standing around who bore witness to this and did not intervene, they are responsible for the lack of response.”

Flanders has extensive experience in the U.S. military, where she managed large budgets for the Pentagon and worked as a naval aerospace engineer.

She noted that both Floyd and the arresting officer, Derek Chavin, who is now facing 2nd degree murder charges, had worked together as security guards for the same Minneapolis club.

“They had some history and I’m not beyond believing that part of that history led to the extreme reaction,” she said. “But you know what, that policeman probably shouldn’t have been on the force, because as I understand he had a history of violent behavior not even associated with being on the police force.”

She added that it does not help to generalize that all police have a problem based on the actions of a few.

“Around the whole country, you and I rely on those brave men and women in blue to come to our assistance when we have a time of trouble,” she said. ” … Even in the more extreme places, the police actually put their life on the line; they leave their loved ones behind and they don’t know if they are going to come back home.”

She noted that a lot of the communities being destroyed in the race riots include a lot of property owned by blacks.

“You know that a lot of those business owners, those black shop owners, probably put their last nickel to making their businesses go,” she said. “And then to see it be ripped apart by people who are actually looting — the looting that is going on now that has nothing to do with George’s death.”

She also noted there have been no marches for those killed by rioters, including retired St. Louis Police Capt. David Dorn, who was responding to an alarm at his friend’s pawn shop when he was shot and killed.

Like Flanders, Cole also worked for the federal government, but in “foreign and domestic terrorism, nuclear and radiological hazards, and inefficient and unaccountable government programs and policies” according to his candidate bio.

He said the right to protest is embedded into American history but there’s still a responsibility to do it right.

“One of the things is we’ve got to be cautious, we’ve got to exercise that right but not destroy other rights as we do that, through property destruction or other types of actions,” he said. “We should protest what we believe are injustices or government overreach.”

“I used to work as a civilian in a number of law enforcement agencies, with federal inspectors general, and colleagues of mine have called and said ‘that is not something we do or condone,'” he said. ” … A lot of the departments have come out and reassured the public that that’s not a use of force that we’re going to use here.”

On Dorn’s death, he said that’s the result of perpetual violence.

“Violence is going to bring about violence, generally. That’s why we try to encourage people to not engage in violence, and generally do things in a way that hurts other people. because once we start doing that it just spirals,” he said.