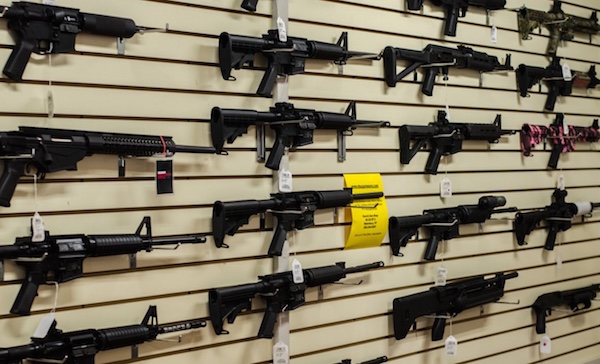 KEEP THEM IF YOU CAN: Two gun-control bills moved through the Statehouse this legislative session but will have to wait until next year to advance through the opposite chamber and on to the governor’s desk.

This year’s legislative session saw two gun-control bills pass their respective chambers, but neither bill advanced beyond that, and both are expected to advance further next year.

S.30, a ban on firearms in hospitals that was approved by the Senate Judiciary Committee and passed in the Senate, did not see action in the House. Under current law, hospitals are allowed to post signage to prohibit weapons from their premises, and violations can result in a charge of felony trespassing. This new legislation would make it a chargeable offense any time someone carries a gun inside a hospital, even if by accident.

The bill started out prohibiting the carrying of firearms in childcare centers and government buildings but was whittled down to hospitals only before the full Senate passed it.

The other bill, H.133, would allow for the confiscation of firearms if a judge determines it is necessary for a relief from abuse order (RFA), even if there’s been no court hearing for the defendant.

“Both of those passed both sides but they haven’t had any progress in the opposite chambers yet,” Eric Davis, president of Gun Owners of Vermont, told True North on Monday.

However, both bills are expected to be taken up and advanced again starting in January 2022.

One bright spot for gun owners has been the rapid establishment of “Second Amendment sanctuaries” in counties and municipalities across the United States. According to the website sanctuarycounties.com, more than 46 percent of all counties in the U.S. have declared they will not enforce national gun-control laws.

Speaking of the trend, Davis said “it’s something that hopefully will pick up again” as gun owners in Vermont weigh the threats of gun control coming from the Biden administration, and even from Gov. Phil Scott’s administration.

“Over the years the absurdity under the dome continued and evolved almost unabated as the rest of us went about our lives just wanting to be left alone until we reached that dreadful moment in 2018 when we realized that nothing was sacred to these people and that even our newly elected ‘pro-gun’ governor would gladly sacrifice our rights to the gods of central planning,” he wrote.

On the federal level, President Joe Biden has made clear he wishes to impose new restrictions on guns. In April, while speaking about the Second Amendment, he said “no amendment is absolute.”

“Obviously you have a presidential administration now that’s fairly hostile to the civilian ownership of firearms,” Davis said. “Thankfully, Washington is still fairly dysfunctional. … Hopefully it continues to be that way and they don’t pass anything major.”

Biden has discussed a range of policies from an assault weapons ban and voluntary buybacks of assault weapons to repealing a law that prevents gun manufacturers from being held responsible for crimes committed with guns.

Meanwhile gun purchases are rising. The latest data from the National Shooting Sports Foundation shows that gun sales have risen 13 straight months. In addition, states such as Texas are legalizing permitless carry of handguns to counter the push by Democrats for gun control.

6 thoughts on “Two gun-control bills will carry over to next legislative session, while 2A ‘sanctuaries’ hold promise for gun owners”