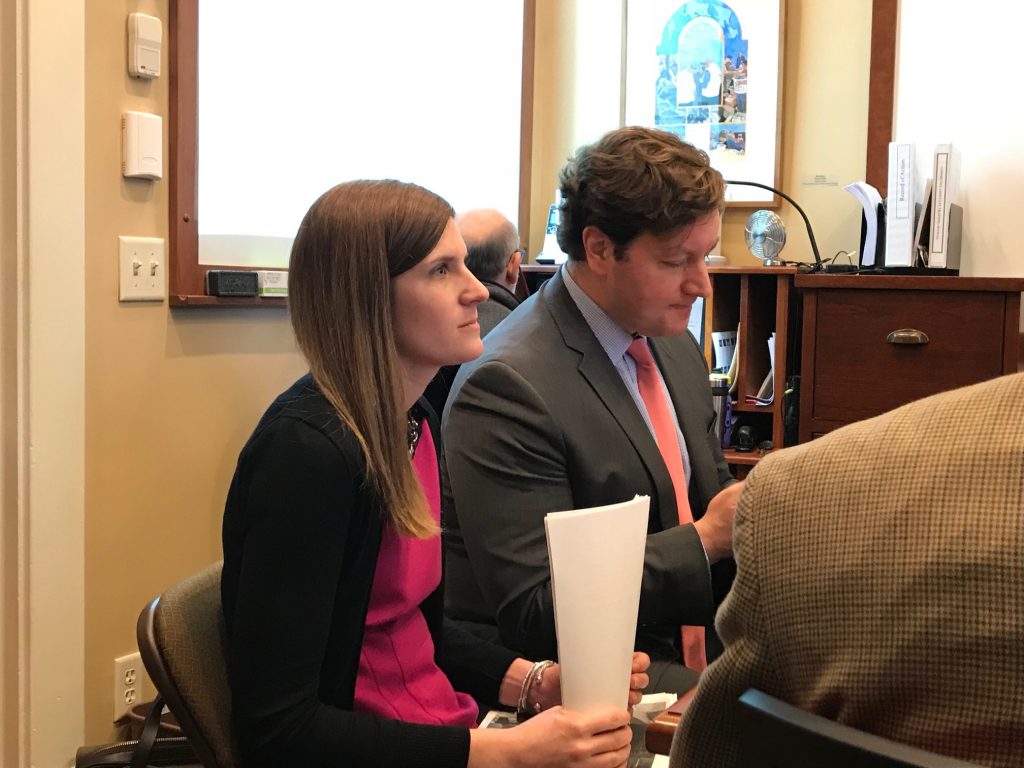 THE TWIN STATE PLAN: Kendal Smith, director of policy development and legislative affairs for the governor’s office, and Michael Pieciak, commissioner for the Department of Financial Regulation, gave updates to the committee of the governor’s voluntary paid family leave proposal.

MONTPELIER — In January, Gov. Phil Scott and New Hampshire Gov. Chris Sununu announced a twin-state family leave program that could provide family leave for 18,500 state employees with the option for individual companies to join in.

On Thursday, the plan received an update at the House Committee on General, Housing, and Military Affairs. Several RFIs (requests-for-information) have been returned by major national insurance companies, and so far the estimates for cost and service are within range of what was originally anticipated.

Presenting the updates were Kendal Smith, director of policy development and legislative affairs for the governor’s office, and Michael Pieciak, commissioner for the Department of Financial Regulation.

“We received seven responses, six from insurance carriers and one from a third-party administrator,” Smith said.

The early cost estimates are $2.8 million to cover six weeks of unemployment at 60 percent of wages. This averages to about $240 per state worker per year. For a non-state worker, there’s an estimated 15 percent bump in cost, or about $35 extra — around $275 per year.

Last year Scott vetoed a bill calling for a mandatory state-run paid family leave program. One criticism was that it required new taxes. The governors’ twin-state proposal does not require new taxes.

“With this approach, we can balance the value of paid family leave with our citizens’ and businesses’ ability to pay,” Scott said at the announcement.

An argument for using the private sector to provide the benefit is there will be no new state bureaucracy. Instead, the administrative tasks will be left to the long-established insurance companies with trillions of dollars already invested.

In order for the program to be created, both states need to pass similar legislation approving the governors’ plan. Both Vermont and New Hampshire have universal mandatory paid leave bills progressing through each statehouse.

In the case of New Hampshire, the Democrat-backed mandatory state-run plan has already been passed through the House and Senate. Smith is confident it won’t go further.

“It’s on the way to Gov. Sununu’s desk. He’s very publicly stated that he intends to veto that bill,” Smith said. “They concurrently are continuing on this proposal as well with the hope that they can continue to negotiate and find a path forward.”

Rep. Joseph “Chip” Troiano, D-Stannard, asked what happens to the governors’ plan if New Hampshire were to drop out of the proposal.

“We’re looking at about 8,500 people in the pool [without New Hampshire’s 10,000], and recently I heard the governor say that we can handle that. Do we have any cost projections as to what that would do?”

Pieciak suggested that were Vermont to go it alone, early estimates still put the cost per state employee in the $250 per year range.

“I’m confident that with 8,500 hundred we would similarly be in the same ballpark,” he said.

In Vermont, Democrats have proposed 12 weeks of full-paid family leave. The House proposal, H.107, will require a new payroll tax. Conservative critics, including Rob Roper, president of the Ethan Allen Institute, are unimpressed.

“This proposal demonstrates exactly why Vermont is an unaffordable, unfriendly place to live and do business,” he wrote in an op-ed.

This bill is currently also in the House Committee on General, Housing, and Military Affairs committee. A similar bill, S.88, currently sits in the Senate Economic Development, Housing, and General Affairs Committee.

Scott does not have one-third Republican support in either Statehouse chamber. This means a veto by the governor could potentially be overridden by Democrats and Progressives.

Rep. Randall Szott, D-Barnard, asked why it’s better to start a new program when there are existing programs in other states.

“You are telling me that it’s better to start from scratch, only in these two specific states?” he asked. “One of the arguments that was getting used against the Vermont universal program was that you would have to start the administration from scratch. And one of the reasons you are proponents for going to insurance companies is because they already have these established protocols and procedures.”

Pieciak responded that joining existing state programs is not ideal.

“I basically just mean there are two states that don’t have a program, and when they are looking at developing a program together, it’s easier if the other state hasn’t already gone down the road of having a program,” he said. “Because then the other state would have to accept them into the program and then the state being accepted in would have to take all of the various decisions that have already been made. Here we are able to make these decisions together as the process develops.”