The Trump administration unveiled this week a final rule that will dramatically improve workers’ ability to access health insurance of their choice.

The new rule will significantly expand the permitted uses of tax-advantaged health reimbursement accounts, or HRAs.

Today, these special employer-based accounts, in which funds can be rolled over year to year, are used by employees to cover medical expenses, including out-of-pocket costs and services uncovered by traditional insurance. 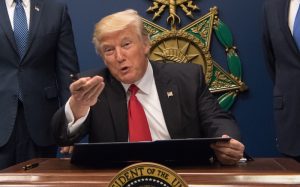 But with this rule, for the first time in the history of these tax-free accounts, the administration would allow employees to use them to pay premiums for individual health insurance.
This change will not only expand health insurance coverage, but will also lower health care costs.

But with this rule, for the first time in the history of these tax-free accounts, the administration would allow employees to use them to pay premiums for individual health insurance.

This change will not only expand health insurance coverage, but will also lower health care costs.

The rule is the product of the combined efforts of the U.S. departments of the Treasury, Health and Human Services, and Labor. It will take effect on Jan. 1, 2020.

A Big Change for Workers Whose Companies Don’t Offer Insurance

With this regulatory initiative, the Trump administration is making a major change in health care financing.

Employers who do not, or cannot, offer health insurance at the place of work, would henceforth be able to deposit tax-free funds into health reimbursement accounts on behalf of employees who wish to use those funds to buy health insurance plans in the individual insurance markets.

While announcing the final rule, administration officials said they expected that the new rule, within a five-year period, could encourage as many as 800,000 businesses to sponsor health reimbursement accounts to fund individual coverage for more than 11 million workers.

This change is a major component of the Trump administration’s efforts to repair Obamacare’s damage to the badly battered individual and small group health insurance markets.

Trump administration officials expect regulatory relief would be most beneficial to small business employers and their workers, a class of Americans hit particularly hard by the dramatic Obamacare premium and deductible increases in the small group market.

In recent years, there has been a serious decline in the number of small and mid-size firms offering their workers group health care coverage.

Not surprisingly, administration officials expect that most of the firms that will take advantage of the new rule will have fewer than 20 employers. The new rule thus holds potential to reverse the decline in health coverage among small business employees.

Benefits Extend to Those Whose Workplaces Offer Insurance

It would allow employers to provide their workers an additional $1,800 yearly(indexed to inflation) in their health reimbursement accounts to reimburse them for certain medical expenses, including dental and vision benefits.

In the case where an employee would turn down the offer of a job-based health insurance plan, for one reason or another, this health reimbursement account funding could be used to offset employees’ premiums if they chose to instead buy a new short-term, limited duration health plan, which can be renewed for three years.

These plans have broad networks, and are much less expensive than the pricey Obamacare health plans.

Beyond the shrinkage of employer-sponsored coverage among small firms, there has also been little choice in terms of health care plans for small business employees.

The new health reimbursement accounts rule has the potential to rectify this problem, and expand employees’ choices well beyond the limited options they have today.

With this change, the Trump administration expects the individual health insurance market to grow significantly, and become more robust as an arena for health plan participation and competition.

This, of course, would partially reverse the disastrous decline in health plan choice and competition that has marked the last six years.

The greatest impact of the Trump administration’s change to the existing health reimbursement account regulations is the liberalization of the federal tax treatment of health insurance.

Under current law, employers and employees enjoy unlimited tax relief for the provision and purchase of health insurance—but if, and only if, that insurance is provided under the conventional umbrella of employer-sponsored group coverage.

For the many small businesses that cannot afford to offer such coverage, many workers and their families, deprived of any individual tax relief to offset their health insurance costs, face the dilemma of either buying inordinately expensive individual coverage on or off the Obamacare exchanges or going without any coverage at all.

By extending the federal tax advantages of traditional group health insurance coverage to health reimbursement accounts for the purchase of individual insurance, the Trump administration rule would give employers who do not, or cannot, offer job-based coverage the chance to help their workers and their families with their premium costs.

There is no cap on the employers’ tax-free contributions; they can give as much as they wish to help their workers.

The rule, in effect, allows for an employer-based defined contribution for health insurance, precisely the kind of financing mechanism that could spur a resurgence in consumer choice, personal ownership of portable health plans, increased plan participation, and robust competition in the nation’s health insurance markets.

However, administrative changes, no matter how beneficial, are no substitute for legislative solutions.

The president has done what he can within the law to improve the market environment for personal health plan choice and competition. His actions will doubtless contribute to an increase in health insurance coverage.

The roadmap for that reform is the Health Care Choices Proposal, widely supported by a broad coalition of health policy analysts.

It would return most regulatory power over health insurance markets back to the states, guarantee financial help to the poor and the sick, and allow any person in a government health program to redirect their public funding to payment for a private or employer plan of their choice.

Americans need relief. They want lower costs and more choice. Trump’s team has taken a good step in that direction and Congress should follow suit.