It has been said that life does not always serve the things we order. We’ll endure disappointments as well as moments of great gratification. And good things come to those who wait. This happens to most everyone at Christmas. Some kids are spoiled rotten and get every gadget they see on TV. Others get practical gifts and usually appreciate them. Those less fortunate might only get a few inexpensive toys but are happy Santa didn’t forget them. And the poor get gifts from our churches, firefighters, police officers and charities. Even if they don’t get something they wanted, most Americans who received a gift are extremely grateful for being remembered by someone on Christmas Day. 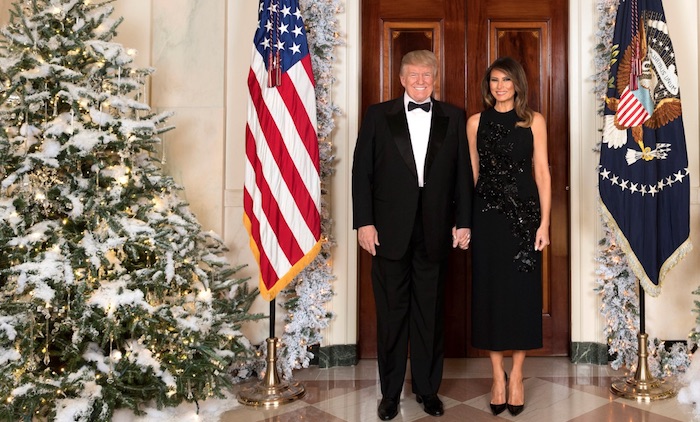 President Donald J. Trump and First Lady Melania Trump are seen Tuesday, December 5, in their official 2017 Christmas portrait, in the Cross Hall of the White House in Washington, D.C.

For every American, Christmas came early this year. President Donald Trump gave everyone a gift they did not ever expect; but far too few appreciate it. Pulling a page out of Ronald Reagan’s playbook, he gifted our nation with the most aggressive tax cut in decades. Even today, too few credit the genius of Ronald Reagan and his insightful management of the failing economy. When he took office, he inherited Jimmy Carter’s mess of double digit inflation and unemployment. With the help of the greatest economists in the world, when he left office he had cut those numbers by two-thirds.

“You can’t be for big government, big taxes, and big bureaucracy and still be for the little guy.”

Since the first recorded history of man, his most despised enemy has not been the thief, the bully, the swindler, the spouse abuser, the hangman, or the tyrannical despot. It has been the taxman. In biblical times, the Jews treated the taxman as a thief, and a criminal. Much of our history has been changed by abuse from the tax collector: The Magna Carta, the French Revolution and, of course, the notorious party in Boston Harbor. And the biggest tax revolt in the U.S., Proposition 13, happened on the Left Coast. Some claim taxation is the worst form of capital punishment.

When the 16th Amendment was first proposed, there were riots in the streets as people chanted; “Better a thousand thieves than one taxman.” They called it an act of tyranny, inquisitorial, undemocratic, and un-American.” New York Gov. Charles Evans Hughes spoke out against the income tax amendment at rallies around the state. By 1912, Republicans who had been leading the charge in defiance against it lost the presidency and both chambers. Democrats did the predictable, they coaxed states into approving it. Soon after The Revenue Act of 1913 became law, Supreme Court Justice Oliver Wendell Homes conceded, “Taxes are what we pay for a civilized society.”

Since the passage of The 16th Amendment, Americans have been squealing like stuck pigs every time they hear rumors about any type of tax increase. The late George H.W. Bush had an approval rating of 93 percent after banishing Saddam Hussein from Kuwait. He was the first president following the end of the Cold War and our economy was sputtering. When questioned about tax hikes, he emphatically said: “There will be none, read my lips.” Bill Clinton, a shrewd Southern populist, and his campaign manager jumped on this. He bashed the Bush economy at every rally and his media buddies mocked Bush in support of Clinton, whose rally call was, “It’s the economy, stupid!”

So why are so many Americans showing little or no appreciation for the Trump tax cuts? This gift came from the wrong guy. The balance in media coverage has been on vacation since Barack Obama took office. The creed of the Fourth Estate to report facts so they will stand up to history’s judgment ended the very day Obama announced his candidacy. Trump’s election became a “dog whistle” for anti-Trump journalists; it’s OK to continue revealing their bias and publicly rewrite of history. So when Trump announced the details of his tax cuts, this was liberal media’s cow bell to fling open the floodgates for attacks from every prominent news organization across America. One Miami Herald reporter wrote, “There’s no hope for those Trump supporters, every one is insane.”

Despite leftist hysterics that Trump’s tax cuts only benefit the rich, it simply is untrue. Yes, all tax cuts affect all brackets, including those who pay the most. But Trump did just as Reagan and Kennedy did, and it is working. Tax rates at every income level were cut by about 10 percent. For the middle class, this equates to $24,000 more tax free income! The ones who are crying the loudest are China, Europe, Canada, Russia, Mexico and Ireland, which is luring U.S. business to Dublin with a 12.5 percent business tax rate.

“Income tax returns are the most imaginative fiction being written today.”

Those who claimed Trump would never pass a good bill are all wet! Consider what Obama gave us Christmas 2008. Let’s compare gifts. Americans hate Obamacare worse than Prohibition. Obama, Joe Biden, Nancy Pelosi and Harry Reid used more questionable legal, unorthodox, slight of hand tricks than a bad carnival shyster to put one extra point on the board to socialize free market health care. Trump, despite opposition from media and leftists in Congress, gave us a Christmas present we really longed for.

“If you’re going to be thinking, you may as well think big.”

Obama and Hillary Clinton, with the help of the media, have railed against everything Trump said he would do and accomplished since being elected. This dismal duo was granted lifetime star-status by media. They convinced America that Trump’s tax cuts were the worst Christmas gift they ever got. But the inconvenient truth for Obama’s fervent supporters is inside their wallets. After they pay their Obamcare premiums, all they have left in their pockets is “the change” Obama promised them. Is that what they really wanted for Christmas in 2008?

President Trump is fulfilling endless campaign promises. Economic growth rose over 4 percent this year. Unemployment is down to 3.5 percent and Black unemployment is down to 5.9 percent. The Hispanic rate is only 4.6 percent since he took office. The S&P 500 index is up 6 percent, yet the rest of the world’s stock markets are down 6 percent. Even former Obama economic adviser Jason Furman admits that underemployment and low wage growth is stronger than any time in recent history. Similarly, Bloomberg columnist Conor Sen points out that job growth has been greatest among goods-producing workers and the least-educated workers. These are numbers Obama, or any president for that matter, would boast about. Yet President Trump continues to take more abuse from the media than any president in history!

When the media found out Trump won the election, the leftists came unhinged. There was an unprecedented meltdown. Media claimed Trump would burn the Constitution and Declaration of Independence. Now some journalists are afraid to even admit they belong to the Fourth Estate, claiming their “comrades” suffer from “Trump Disbelief Syndrome.”

The morning after the election, MSNBC’s Rachel Maddow reported: “You’re awake; you’re not having a terrible, dream. You’re not dead, and you haven’t gone to hell!”

Like him or not, nobody can argue with the facts: Trump is doing exactly what he said he’d do; and more.