President Donald Trump prompted a thunderous chant of “USA, USA” from an audience of conservative activists Saturday when he announced actions to protect free speech on college campuses.

Trump made the announcement after inviting Hayden Williams, 26, who says he was assaulted for his beliefs Feb. 19 at University of California, Berkeley, to come onstage and speak briefly at the Conservative Political Action Conference. 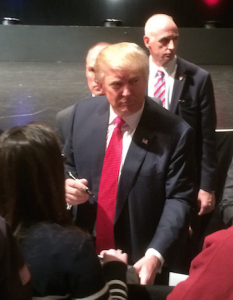 “It will be signed very soon,” the president said of the executive order.

“He took a hard punch in the face for all of us, and we can never allow that to happen,” Trump said.

“Today, I’m proud to announce that I will be very soon be signing an executive order requiring colleges and universities to support free speech if they want federal funding,” Trump said, as the crowd erupted with the “USA, USA” chant.

“If they want our dollars, and we give it to them by the billions, they’ve got to allow people like Hayden and many other great young people and old people to speak,” Trump said. “Free speech. If they don’t [allow free speech] it will be very costly.”

“It will be signed very soon,” the president said of the executive order.

The event draws a sizable number of college-age conservatives at a time when viewpoint discrimination and campus free speech are significant issues across the nation.

“We reject oppressive speech codes, censorship, political correctness, and every other attempt by the hard left to stop people from challenging ridiculous and dangerous ideas. These ideas are dangerous,” Trump said. “Instead, we believe in free speech. Including online and including on campus.”

Trump called the man that punched Williams a bully, then paused and said: “Just for the media, I’m sure he’s a lovely young man [who] just had a little temper tantrum.”

Williams was interviewed Thursday by The Daily Signal at CPAC. The next day, Berkeley campus police arrested a man identified as Zachary Greenberg, 28, and charged him with assault with a deadly weapon and attempting to cause great bodily injury.

Williams, who is not a Berkeley student, is associated with Campus Reform, a network of student journalists. It is part of the Leadership Institute, a Washington-based conservative group that trains young activists.

“At the Leadership Institute, we are committed to making campuses great again,” Williams said to the CPAC crowd at Trump’s invitation. “I thank you so much for bringing me up here to let me speak. It’s great that I’m being recognized, but there are so many conservative students across the country who are facing discrimination and harassment and worse if they dare to speak up on campus.”

I’m glad we could bring this to the forefront. I just want to say, if these socialist progressives had their way, they would put our Constitution through the shredder in a heartbeat. So, it’s as important now more than ever to work at Leadership Institute and Campus Reform, exposing these liberal abuses to the public.

Trump also sought to clarify his view after drawing fire by asserting Thursday that he didn’t believe North Korean dictator Kim Jong Un was to blame for the death of Otto Warmbier, the young American who was tortured by the communist regime and died shortly after his release.

“I’m in such a horrible position, because in one way I have to negotiate [with Kim],” Trump said, who departed early from his second summit with Kim over the issue of lifting economic sanctions.

“The other way, I love Mr. and Mrs. Warmbier, and I love Otto,” the president said. “And it’s a very, very delicate balance. He was a special young man, and to see what happened was so bad.”

In other remarks at CPAC, Trump joked that he hoped the Democrats double down on their so-called Green New Deal, and worried that he might have brought it up too early.

“The Green New Deal is something they should promote. They should work hard. They should stay with that argument, never change,” Trump said, to laughter. “No planes. No energy. When the wind stops blowing, that’s the end of your electric. ‘Darling, is the wind blowing today? I’d like to watch television.’”

Trump asserted that increased border security is needed to keep America safe. Last month, he declared a national emergency to use more than $6 billion for new construction of a wall or other barricades at the southern border.

But with such low unemployment and more companies moving back to the United States, the president said, he also supports a legal, merit-based immigration system to help fill American jobs.

Trump also slammed special counsel Robert Mueller’s ongoing investigation of Russian meddling in the 2016 election, including potential collusion between the Trump campaign and Moscow to help Trump win the presidency.

Trump said “unelected” prosecutors were after him because they were upset about the outcome of the 2016 election, when he defeated the Democrats’ nominee, Hillary Clinton.

“Unfortunately, you put the wrong people in a couple of positions and they leave people for a long time that shouldn’t be there, and all of a sudden they’re trying to take you out with bulls—,” Trump said.