Saying that “in a sense” he is “a wartime president,” President Donald Trump wants Congress to approve $500 billion in new spending to send money directly to American households reeling from the ongoing coronavirus pandemic.

Details are still being worked out about how much each taxpayer would receive and who will be eligible, Trump said, but there’s bipartisan support for the effort. 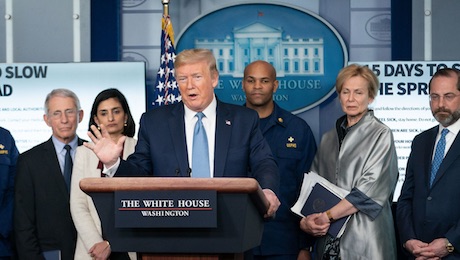 The payments, according to the New York Times, would be sent in two waves. The first would be April 6, the second on May 18. The amount of each payment would be dependent on each family’s size and income.

The White House also wants Congress to approve $300 billion to help small businesses to pay their employees, $50 billion for airlines and $150 billion in loan guarantees to stabilize the economy.

Also on Wednesday, the U.S. and Canada will close their border to non-essential traffic to limit the spread of the novel coronavirus.

With more than 6,000 confirmed coronavirus cases in the U.S. and 112 deaths through Tuesday night, elected officials across the country are struggling to find the right approach to deal with the pandemic.

The San Francisco Bay area has taken the most extreme measures – the region is on virtual lockdown.

San Francisco and six surrounding counties are under an unprecedented “shelter-in-place” order. Residents are not to leave their homes for nonessential purposes. Nonessential businesses are to remain closed.

As of Tuesday night, the Bay area reported 356 confirmed cases of COVID-19, the novel coronavirus that originated in China in December.

New York City Mayor Bill de Blasio said Tuesday that he was considering taking similar action in the nation’s largest city and warned residents and businesses to be prepared. A decision could come as soon as Wednesday or Thursday.

Schools in 39 states have been ordered closed temporarily. Other states, such as Texas, are allowing local districts to decide whether to close on their own.

Florida cancelled all remaining testing and Kansas ordered schools closed for the rest of the school year. The governors of California and Ohio strongly suggested their schools might not reopen either.

Governors in many U.S. states have barred dining in at restaurants and bars. Other states are taking a “social distancing” approach: a limited number of diners are allowed as long as they can remain at least six feet apart.

New York Mayor Andrew Cuomo has blamed the varying approaches to containing the coronavirus on the Trump administration, arguing there should be a unified federal standard.

Unemployment, meanwhile, is rising and the stock market is reeling.

President Donald Trump said the White House is working on a plan to send many Americans a check to help stabilize families and stimulate the economy, which is heading for a recession. Congress also is working on a relief package.

Symptoms of COVID-19 can include fever, coughing and trouble breathing. Most people who have it develop only mild symptoms. But some people, usually the elderly and those with other medical complications, develop more severe symptoms, including pneumonia, which can be fatal.