President Donald Trump made it official Tuesday that the administration was halting money to the World Health Organization, the international body that said in January that COVID-19 could not be spread by human-to-human contact, and praised China’s response to the virus.

“Our countries are now experiencing — look all over the world — tremendous death and economic devastation because those tasked with protecting us by being truthful and transparent failed to do so,” Trump said. “It would have been so easy to be truthful. And so much death has been caused by their mistakes. We will continue to engage with the WHO to see if it can make meaningful reforms.”

Trump said funding will be stopped during a review of the organization. 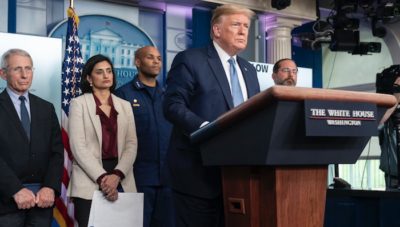 “American taxpayers provide between $400 million and $500 million per year to the WHO. In contrast, China contributes roughly $40 million per year, and even less,” Trump said. “As the organization’s leading sponsor, the United States has a duty to insist on full accountability.”

“One of the most dangerous and costly decisions from the WHO was its disastrous decision to oppose travel restrictions from China and other nations,” Trump continued, adding, “The WHO’s attack on travel restrictions put political correctness above lifesaving measures.”

The United States contributes 14.7% of the World Health Organization’s $38 billion budget, while China contributes only 0.21%, according to WHO’s numbers.

According to WHO, contributions from the U.S. government, American citizens, and U.S.-based charities make up 76% of all voluntary contributions to the organization. That amounted to $945.6 million from 2016 to 2017.

Congress authorized about $123 million in taxpayer funding for WHO in the last fiscal year, and Trump’s fiscal 2021 budget request proposed to reduce funding to about $58 million.

The announced review by the administration also comes as the Senate Homeland Security and Governmental Affairs Committee has begun an investigation into the WHO.

“The reality is that the WHO failed to adequately obtain, vet, and share information in a timely and transparent fashion,” Trump said from the Rose Garden during the daily press briefing. “The world depends on the WHO to work with countries to ensure that accurate information about international health threats is shared in a timely manner. If it’s not, to independently tell the world the truth about what is happening.”

Trump also faulted the WHO for delays in declaring a public health emergency that he said “cost valuable time, tremendous amounts of time.”

On Jan. 14, WHO unquestioningly circulated China’s official talking points in a tweet, saying, “Preliminary investigations conducted by the Chinese authorities have found no clear evidence of human-to-human transmission of the novel#coronavirus (2019-nCoV) identified in #Wuhan, #China.”

“The WHO failed to investigate credible reports in Wuhan that conflicted directly with the Chinese government’s official accounts,” Trump said. “There was credible information to suspect human-to-human transmission in December 2019, which should have spurred the WHO to investigate immediately. Through the middle of January, it parroted and publicly endorsed the idea that there was not human-to-human contact despite reports and clear evidence to the contrary.”

Brett D. Schaefer, a fellow in international regulatory affairs at The Heritage Foundation, contends this may not be the best time to cut funding for the WHO, and worse yet, could make it more difficult to hold the organization accountable.

“Instead of ending funding during the current crisis, the U.S. should condition future funding to specific actions by the World Health Organization,” Schaefer wrote in an op-ed for The Daily Signal.

China backed Tedros in May 2017 when he ran for the top job at the World Health Organization.

President Trump announced @KayColesJames will be a part of the Great American Economic Revival—working to #reopenAmerica and begin economic recovery.

We look forward to sharing recommendations from the National Coronavirus Recovery Commission. pic.twitter.com/vrL0dGHf3u

During the press conference, Trump also announced the formation of Great American Economic Revival Industry Groups, which would involve bringing together leaders from different sectors of the economy and American life.

“We have a list of people that I’ll be speaking to over the next very short period of time, in many cases, tomorrow,” Trump said.

Kay C. James, president of The Heritage Foundation, is among those in the thought leaders group, which also includes former Secretary of State Condoleezza Rice and John Allison, former president and CEO of the Cato Institute. Others involved include top executives from health care, retail, sports, tech, and agriculture, among other sectors.

9 thoughts on “Trump pulls WHO funding, says organization ‘must be held accountable’”