President Donald Trump said the staggering new unemployment numbers released Thursday by the U.S. Department of Labor were not a surprise but that Americans have to “get back to work” and predicted they would.

Nearly 3.3 million Americans filed unemployment claims last week, a record number as businesses were forced to shut down by state and local governments across the U.S. to help slow the spread of the novel coronavirus. 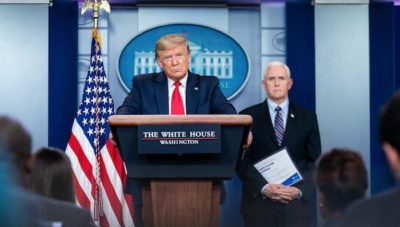 “It’s nobody’s fault, certainly not in this country,” Trump said. “I heard it could be 6 million, could be 7 million. … I think we’ll come back very strong.”

Earlier this week, Trump said he wanted the U.S. to reopen by Easter Sunday, which is April 12. With the U.S. surpassing 1,000 deaths and nearing 81,000 confirmed cases of COVID-19, many health officials said that would be too early. But Trump reiterated during his press briefing late Thursday afternoon that the country can’t stay closed for long.

“We may take sections of the country, we may take large sections of our country that aren’t so seriously affected and do it that way, but we have to start the process pretty soon,” Trump said. … “Our people don’t want to stay out.”

Later in the press breifing, Vice President Mike Pence that companies like Walmart, Amazon and Pizza Hut were hiring tens of thousands of new employees to keep up with shopping sprees.

Trump also praised the U.S. Senate for passing a $2.2 trillion coronavirus stimulus package late Wednesday night that the House is expected to vote on Friday.

“The House of Representatives must now pass this bill,” Trump said.

The stimulus package includes $250 billion in direct payments to Americans depending on their income, $250 billion in expanded unemployment insurance benefits, $350 billion in guaranteed small business loans and $500 billion in loans for businesses negatively impacted by the pandemic.

If passed in the House and signed by Trump, the legislation would provide payments of $1,200 to each adult and $500 to each child under age 17 depending on a household’s 2019 income. A married couple with children could receive up to $3,400.

The measure would extend jobless insurance benefits by 13 weeks. It would include independent contractors such as freelancers, furloughed employees and gig workers.

One thought on “Trump on record unemployment numbers: U.S. has to ‘get back to work’”