President Donald Trump’s administration is clamping down on asylum rules for immigrants coming to the United States, the White House announced Thursday. 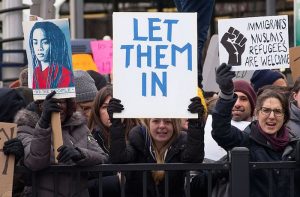 Thousands of lawless foreigners are preparing to jump line in front of lawful immigrants seeking to come to the country legally. Many Democrats favor their activities, seeing political gain for their party.

The Department of Homeland Security and the Justice Department jointly issued a new rule requiring that immigrants seeking asylum along the southern border must present themselves lawfully at a port of entry.

Trump will sign a proclamation with specifics. The president last week announced his intention to do so.

The new rule is aimed at ensuring illegal immigrants who are subject to the terms of the proclamation that Trump issues are not eligible for asylum.

Consistent with our immigration laws, the president has the broad authority to suspend or restrict the entry of aliens into the United States if he determines it to be in the national interest to do so.

Today’s rule applies this important principle to aliens who violate such a suspension or restriction regarding the southern border imposed by the president by invoking an express authority provided by Congress to restrict eligibility for asylum.

Our asylum system is overwhelmed with too many meritless asylum claims from aliens who place a tremendous burden on our resources, preventing us from being able to expeditiously grant asylum to those who truly deserve it.

Today, we are using the authority granted to us by Congress to bar aliens who violate a Presidential suspension of entry or other restriction from asylum eligibility.

The new rule clarifies that anyone who illegally enters the United States will be ineligible for asylum.

The president is relying on the Immigration and Nationality Act, which states in part:

In June, the Supreme Court upheld Trump’s broad statutory authority to implement entry restrictions in a ruling on the policy of extreme vetting that opponents characterized as a “Muslim ban.”

Under the proclamation, those who arrive at a port of entry will remain eligible for asylum. The Department of Homeland Security is deploying additional resources to ports of entry.

Illegal immigrants are often coached in advance to claim “credible fear” in order to claim asylum. Before 2013, about 1 in every 100 arriving immigrants claimed credible fear and sought asylum. Today, that has spiked to 1 in 10, according to the White House.

About two-thirds of immigrants claiming credible fear are from the Central American nations of Guatemala, Honduras, and El Salvador, and do not have valid asylum claims, but are released into the country because the existing asylum system has become overwhelmed, the White House said.

Last year, about half of the illegal immigrants who claimed credible fear did not show up for their assigned hearing or even file an asylum application.

In fiscal 2018, which ended on Sept. 30, U.S. Customs and Border Protection encountered 612,183 inadmissible immigrants. Of those, 404,142 aliens entered illegally. About 98 percent of the latter—396,579—who entered illegally were apprehended by CBP along the southern border.