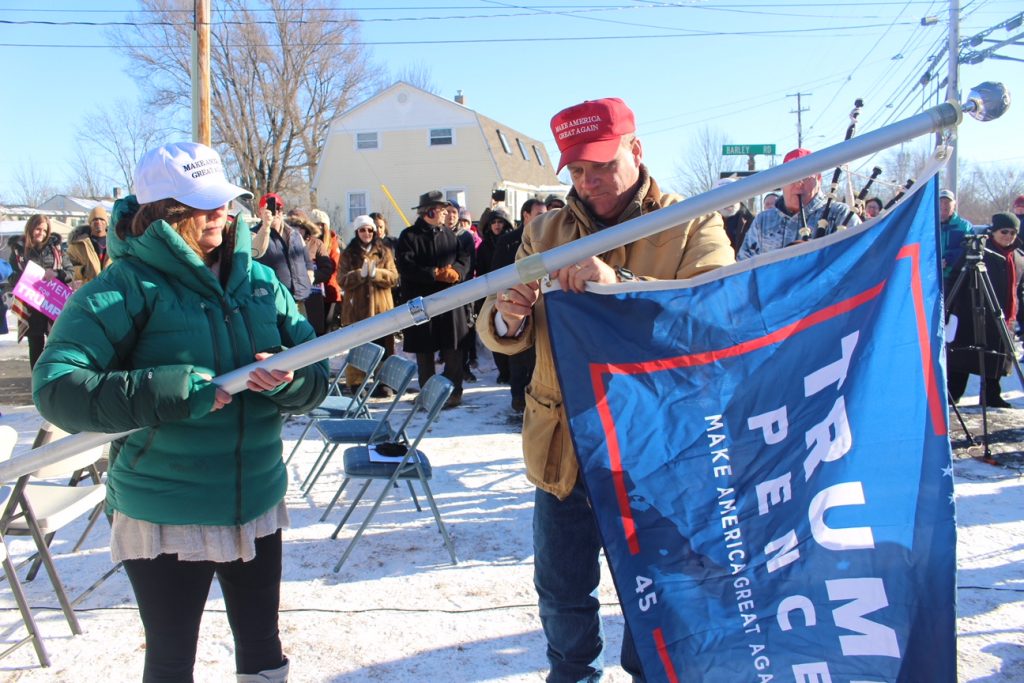 UNBOWED: Military veteran Gus Klein and his wife, Ann-Marie, raise their new Trump 2020 flag sent from the president’s son after the original flag was burned on their front lawn by vandals in November.

BURLINGTON, Vt. — A local man’s Trump flag is flying high again nearly two months after vandals torched a similar one in an act of political hate while the family slept.

On Nov. 25, Burlington resident Gus Klein contacted police to report that his Trump 2020 flag had been burned and thrown on his wood porch. The news got national attention as an act of political hate and vandalism, catching the ear of Trump campaign headquarters and even Eric Trump, the president’s son.

After some back-and-forth communication with campaign representatives, the Kleins received a new flag and other campaign materials, such as shirts and a hat signed by President Donald Trump and Vice President Mike Pence.

That flag was hoisted Saturday at the Kleins’ home in the New North End. The neighborhood event attracted over a hundred guests and was accompanied by bagpipe music and speeches from 2018 Republican candidates, including U.S. Senate candidate Lawrence Zupan and congressional candidate Anya Tynio.

Klein said the event was a victory over political hatred. 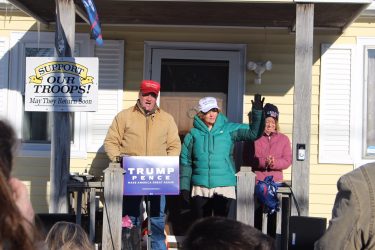 Gus Klein finishes up the afternoon’s speeches from his porch in the New North End.

“The folks that did this, it has turned into a positive event as you can see,” he said. “It has brought the community together. It has brought a lot of people in here who have an opportunity to tell our story.”

Since their original flag was burned and the story went viral, the Kleins have continued to be targets of left-wing harassment and death threats. Similar threats have been made recently against other local Republicans, such as 2018 state House candidate Deserae Morin.

Klein said that police identified the vandals as two young women in their teens. The girls are said to be participating in a restorative justice program. According to Klein, they have not yet come forward to apologize for their politically motivated vandalism.

“I haven’t received any message at all,” he said. “The court system sent a piece of paper asking me to be part of the decision process for what type of punishment [they should receive]. I’m not trying to punish anybody by any means.”

Klein said the issue is more about people coming onto the property to commit vandalism and endanger his home. He said he has publicly invited the vandals to talk with him in person.

“You don’t know me as a community member,” he said in a message to the girls. “I support Donald J. Trump and I support him proudly. However, I am a member of the community and there’s a lot of stuff I do in the community, so get to know me before you come over and vandalize my property.”

Zupan noted that while there may be anger at the vandals, it’s also an opportunity to demonstrate civility toward others in the face of hate.

“The person or persons who vandalized Gus and Ann-Marie’property is, for all we know, [someone who] … wants to see the best for other people,” he said. “Perhaps it’s someone who became confused by the voices who deliberately blur the otherwise sharp distinction between legal and illegal immigration. Perhaps it’s someone who’s become persuaded that a president who doesn’t let anybody and everybody cross over an unprotected border is a racist or a bigot.”

A crowd gathers on Saturday, Jan. 12, 2019, to hear speeches and see the new flag sent from the Trump campaign.

Zupan went on to list examples of how people in the mainstream media have intentionally distorted the messages and the actions of the president to paint him and his supporters as racist and bigoted.

Tynio, in her speech, noted the tense political atmosphere in the nation and said she is proud of her party’s leader.

“This is a very difficult time that we are having right now during the government shutdown. It is important that we stand our ground because border security is security for our nation,” she added.

Kolby Lamarche, a Burlington High School sophomore who attended the flag ceremony, said he also received harassment and bullying, but at school.

“It seems that my political infancy has gone through its cycle and spit out a young man with his eyes wide open,” said Lamarche, who served as the head of the Vermont Young Republicans during Trump’s 2016 campaign.

“It is almost surely uncommon for everyone one of us not to have a story of being called a Nazi, being called a racist, losing friends, losing communication with relatives, receiving threats of violence or even having an apple thrown at you,” he continued. “As we set into the 2020 campaign to keep America great … supporters of the president of the United States Donald Trump will not shut up. We will not bow to political correctness, we will not remain silent or fall to a lower standard.”

While most motorists passing by the event gave beeps of approval and thumbs up, one car driving by had “Trump is a racist” and other hateful comments painted on its windows. The car was largely ignored and the gathering continued peacefully without incident.