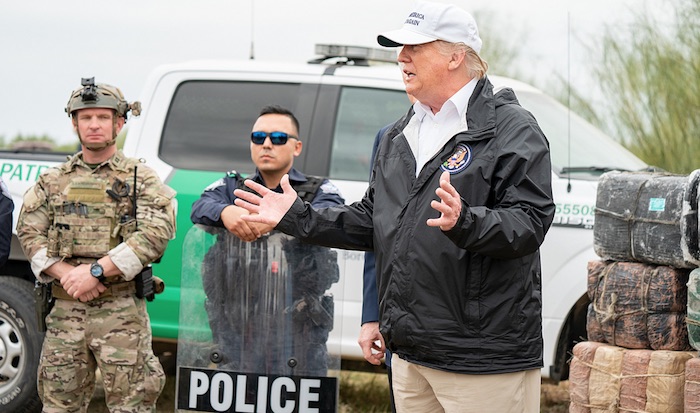 President Donald J. Trump during a visit to an overlook along the Rio Grande on January 10, 2019, at the U.S. Border Patrol McAllen Station in McAllen, Texas.

President Donald Trump doubled down on his claim that “only a Wall will work” to secure the U.S.-Mexico border in a tweet Tuesday.

“Polls are now showing that people are beginning to understand the Humanitarian Crisis and Crime at the Border,” he wrote on Twitter. “Numbers are going up fast, over 50%. Democrats will soon be known as the Party of Crime. Ridiculous that they don’t want Border Security!”

“Only a wall will work,” he wrote in an earlier tweet Tuesday.

It wasn’t clear what polls Trump was referencing, or whether he was claiming 50 percent of people believe there’s a border crisis or that the number of people who think there is a crisis has increased 50 percent.

A Washington Post-ABC News poll published Sunday reported 42 percent support for a border wall, up from 34 percent in January 2018. The poll was conducted Jan. 8 to 11 among a random sample of 788 Americans with a margin of error of 4.5.

Nearly half of all Americans (47 percent) say there is a serious problem at the border but decline to call it a crisis. Just under a quarter (24 percent) label the current situation a crisis.

The Politico-Morning Consult poll was conducted Jan. 4 to 6 among a sample of 1,989 registered voters with a margin of error of 2.

“Nancy and Cryin’ Chuck can end the Shutdown in 15 minutes. At this point it has become their, and the Democrats, fault!” he wrote.

The government shutdown hit day 25 Tuesday, continuing to set a U.S. record. It was triggered after a short-term continuing resolution to fund the government expired Dec. 21. At the center of the funding battle is approximately $5 billion in funding for the border wall the president wants to build.