The Environmental Protection Agency announced Thursday that it will undo some of the Obama administration’s regulations on methane, which it said could save oil and natural gas producers up to $123 million through 2025.

In 2016, the Obama administration imposed limits on methane emissions from oil and gas production after determining that methane emissions were increasing along with the boom in hydraulic fracturing, or fracking, to reach oil or natural gas.

The EPA published the revision in the Federal Register, and it is now open to 60 days of public comment. 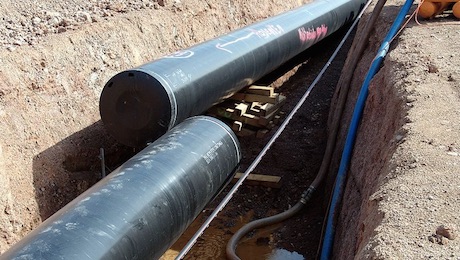 Among other things, the proposed rule would remove all sources in the transmission and storage segment of the oil and natural gas industry from regulation, both for ozone-forming volatile organic compounds and for greenhouse gases.

The proposed new rule is a result of an executive order from President Donald Trump that the administration said was designed to promote energy independence and economic growth.

That order directs federal agencies to review existing regulations that potentially “burden the development or use of domestically produced energy resources,” including oil and natural gas.

“The Trump administration recognizes that methane is valuable, and the industry has an incentive to minimize leaks and maximize its use,” Wheeler said. “Since 1990, natural gas production in the United States has almost doubled while methane emissions across the natural gas industry have fallen by nearly 15%. Our regulations should not stifle this innovation and progress.”

Rep. Peter Welch strongly opposes plans by the Trump Administration to ease methane emission rules for oil and gas companies. "That is a truly astonishing and reckless decision. You know Trump is like the last person standing who don't realize that the planet is burning." #VTPoli

Among other things, the proposed rule would remove all sources in the transmission and storage segment of the oil and natural gas industry from regulation, both for ozone-forming volatile organic compounds and for greenhouse gases.

The change also would rescind the methane requirements in the 2016 regulation that apply to sources in the production and processing segments of the industry.

“Even for an administration with a pattern of catering to corporate polluters, the proposal to eliminate federal government requirements limiting methane emissions is wildly irresponsible and reckless,” Pallone said in a written statement, adding:

Many within the fossil fuel industry understand this, and that’s why Exxon, Shell, and BP America urged EPA to maintain rigorous methane rules. Yet the Trump administration is defying science, common sense, and the express concerns of major industry players to disassemble critical public health and safety protections.

Supporters of the move see it differently.

The Obama regulations were “heavy-handed” and a “nonsolution in search of a problem” said Nick Loris, energy and environment economist at The Heritage Foundation.

The EPA under the Trump administration “is wise to right size them,” Loris said in a statement released by the think tank, adding:

Energy producers have an incentive to capture and sell methane, the main component in natural gas, because it has economic value—yielding low-cost energy for consumers and reducing the United States’ allies dependence on Russian gas. The EPA even notes methane emissions from the industry have fallen despite the fact [that] energy production has skyrocketed. Furthermore, states have implemented their own rules and the private sector is taking voluntary action to capture methane.

The EPA said its regulatory impact analysis estimated the amendments would save the oil and natural gas industry between $17 million and $19 million a year, totaling between $97 million and $123 million from this year through 2025.