A major trash hauler that serves Vermonters has issued a statement to customers saying it will have to raise rates in order to accommodate for the rising cost of recycling.

According to a letter sent from Myers Container Service Corp., legislation coming out of Montpelier is putting pressure on the bottom line.

“As you may have read in the news, the recycling market overseas continues to change a great deal. The value of American recyclables in China just aren’t worth as much as they once were. Current solid waste markets are changing, and disposal costs are on the rise,” the company states.

It continues that there has been an increase in the cost for disposal of both trash and recycling, and “many other factors have forced us to raise our rates.” It adds that regulations in Montpelier (Act 148) and in Washington D.C. (the Federal Farm Bill) put pressure on the haulers. 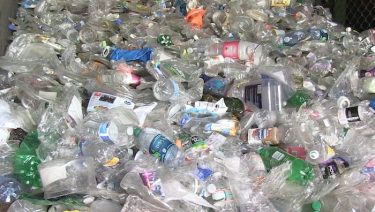 ALL FOR NOTHING?: The cost of recycling continues to go up and that cost is getting passed onto consumers via the trash haulers.

Myers also notes that all the recyclables that it collects funnel through Chittenden County. The Chittenden County Solid Waste District (CSWD) has issued its own letter stating that costs are rising.

“The increase is due to the continued decline in the markets for recycling commodities, resulting in the insufficient revenue to offset the costs to operate and manage the MRF [materials recovery facility] program,” it states.

Michele Morris, director of outreach and communication for Chittenden County Solid Waste District, told True North their cost for processing a ton of recyclables is rising from $65 to $80.

Regarding developments in China, she said the nation, which had previously been taking up to 80 percent of the world’s recyclables, has “effectively shut down all incoming scrap material into their country. … The impact is you flood the rest of the markets.”

The good news, Morris says, is that now the U.S. is reinvigorating its own infrastructure to process recycling. For example, the company Nine Dragons Paper is now inquiring to U.S. companies in Maine and the midwest to process recyclables and send those byproducts to China to be turned into new cardboard and paper.

Regarding Act 148, the state’s 2012 recycling law, she said since 2015 it has been illegal to put recyclables into a Vermont landfill — so that should not have anything to do with current cost increases.

She said one thing driving costs is that transportation costs are rising sharply, largely due to Vermont’s tight labor market.

“They can’t get a CDL driver for what they used to,” Morris said.

She noted that stories in the media about large masses of plastics floating in the ocean have more to do with the policies of eastern nations than those in the west. She said estimates are 80 percent of those plastics are from still-developing Asian countries where landfills remain uncommon.

“They don’t have adequate infrastructure for solid waste management,” she said.

Josh Kelly, who works for the Department of Environmental Conservation in the Solid Waste Program, noted that recycling materials are commodities not unlike those in the energy sector.

“I would compare this to gas prices in a way because gas is a global commodity and we’re all familiar with gas prices going up and going down,” he said. “Steel, aluminum, plastic, milk jugs, paper, cardboard, glass, these are all commodities in the recycling stream.”

On the China factor, he said even though most of Vermont’s recyclables never made it to China, the country’s crackdown on its intake of these materials nonetheless reverberated into the Vermont market.

Kelly says there are some materials the trash haulers actually lose money on.

“Some they take a loss on such as glass, and some they make a profit on, like aluminum,” he said. “And they add up all those profits and losses to figure out how much money they make at the end of the day so they can pay their staff and their overhead.”

Regarding Act 148, he noted that starting July 1 this year food scraps will also be banned from going into landfills.

Morris concluded that ultimately the waste society puts out depends on consumer habits.

“Stuff gets made because we want it and we buy it, and then we make the choice of how to dispose of it,” she said. “So organizations like the Chittenden Solid Waste District and companies that are waste haulers and landfill owners and wastewater treatment plant operators, we don’t make those decisions.”