On the issue of flying political activist flags, voters in Barre approved a charter change that would ban non-official flags from being raised on city property. After months of debate over whether to have a Black Lives Matter flag in City Hall Park — which resulted in both BLM and pro-police flags being flown — residents said no to all non-official flags flying on city grounds. The ballot item passed by a vote of 984-492. 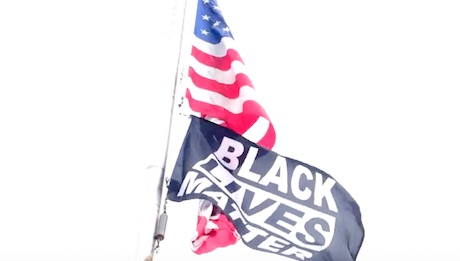 NOT AT OUR SCHOOLS: The city of Barre has voted that no “non-official flags” should be flown on city property.

School boards across the state have spent hours of contentious debate on whether to raise BLM flags on their campuses. Last year the Mill River Unified Union School District board voted to raise the BLM flag, but the community responded with gathering more than 500 signatures against it.

A couple of Barre City Council candidates have recently weighed in on social justice issues — and subsequently lost their election bids. School board member Timothy Boltin expressed concerns about transgender persons using public bathrooms with the biologically opposite sex, only to lose his election amid allegations that he is “transphobic.”

“How do we accommodate the students that wouldn’t feel comfortable?” Boltin asked at a January school board meeting.

For the same council race, candidate Brian Judd lost his bid after he challenged the notion that systemic racism is abundant throughout Barre.

On this issue of setting up pot shops, 24 Vermont cities and towns approved retail sales of cannabis, as allowed following passage of S.54 (Act 164) in 2020. Some of the largest cities to do approve cannabis sales locally include Burlington, Winooski, Brattleboro, Bennington, Brandon, Montpelier and Middlebury.

Vermontijuana.com was happy to report the trend: “While some big ski towns are still waiting in the wings, there were impactful yes votes in Central Vermont in Waterbury and Duxbury, towns on Route 100 which form the gateway to Stowe, Sugarbush, and Mad River Glen respectively. Waitsfield voted to put the retail sales question on a future ballot, and is expected to approve.”

In October, school board members in Rutland voted 6-4 to scrap the Rutland High School “Raiders” name over concerns about Native American stereotypes. The school has since picked a new name, the “Ravens,” but on Town Meeting Day voters elected three new school board members who spoke out strongly against changing the name.

Another development in Tuesday’s election was that three elementary school districts voted to disband from state-mandated mergers required under Act 46. These were the Rochester-Stockbridge, Addison Central, and Windham Northeast Union districts. Act 46, the state’s school district merger mandate, has been controversial due to forcing districts to merge in some cases against the will of local voters. An elementary school in Ripton (Addison Central) would have been closed had the community not voted to back out of the merger.

One town election may be heading for a recount. In the race for Essex town clerk, challenger Tracey Delphia edged out incumbent Elaine Haney with 3,350 votes to 3,346 votes — just four votes made the difference.

The Town of Essex rejected a municipal merger with Essex Junction by only 17 votes. The idea had been promoted by the town’s selectboard.

One thing that did not change on Tuesday — Chittenden County continues to be dominated by liberal voices, as one Twitter noted.

Shout out to all the prog & independent candidates, organizers, and activists for the hard work they put in over the past few months. #BTV #VTpoli pic.twitter.com/azBQ3OqYHZ

The agony of defeat

James Buck caught a candid moment from Town Meeting Night. In Burlington’s mayoral race, Progressive challenger Max Tracy, the Burlington City Council president, reacted to news that he lost the mayor’s race by only 129 votes. He lost to Democrat incumbent Mayor Miro Weinberger. Posting on his instagram page, Buck captions “the moment Burlington mayoral candidate Max Tracy learns he lost the election by 129 votes.” The photo says it all.