I received a draft of our revised town plan back in October and decided to attend our commission’s next meeting, which was held on Oct. 25. I had two main questions: one concerned an action plan item that suggested obtaining a grant to fund an economic study that I took issue with, and the other was the fact that the proposal took no position on the insurgency of solar arrays in Vermont. I think most people would agree they are not aesthetically pleasing, and to this point towns have had little or no say about where they can be located. The speed at which they are being erected is also of concern, as is the fact that taxpayers are being asked to subsidize them with a carbon tax.

I’m not against solar, but I find the urgency and pressure tactics of the solar industry — combined with the need for subsidies — quite disturbing. 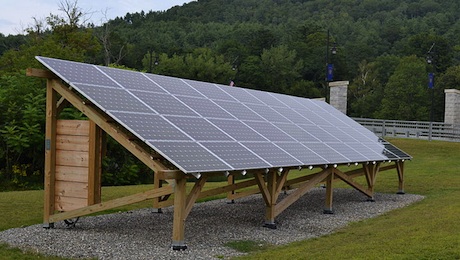 Act 174, passed in 2016, says town plans get “substantial deference” for energy siting, but only if those plans agree with state and regional energy goals.

It was explained to me that the Energy Committee was preparing that part of the plan and it was currently pending submission to the Planning Commission. On Nov. 7, I attended the Energy Committee meeting to address my concerns about solar arrays. The solar discussion centered on maps of preferred solar locations, and I was told they would be discussed at upcoming informational meetings in the near future. I must admit that, having seen the maps of preferred solar sites without the benefit of the informational meeting, I am even more concerned and starting to wonder where the agenda to push for all this solar is coming from.

Consider the subsidies we are being asked to provide to prop up  renewable and sustainable projects, of which there are many. It must be they can’t survive on their own because every time we say no they bring us another request for the same tax. Would it not be better to let these projects develop in the private sector rather than diminishing property rights and lowering the standard of living of working families? Maybe it’s for the greater good as some imply, but that seems doubtful when you consider the people who will be on the hook for the subsidies. Nonetheless there are many trying to save us from ourselves and a changing climate by covering our landscape with solar arrays.

On Nov. 13 I attended another Planning Commission meeting. The Rutland Regional Planning Commission (RRPC) representative reviewed areas of the plan and discussed how they will be addressed in its final draft. It is my understanding this plan can be written totally by our Planning Commission, but we are opting to let the RRPC write it so it will be compliant with state guidelines and the February approval deadline can be met.

Now I wonder: is this solar agenda coming from the same place as the state guidelines? Even more important, are we questioning any of these guidelines, or just going though the ritual of a planning process? Even worse, is this planning process just a way of making us think the agenda was our idea?

I remember being told by the commission at our first meeting that a survey showed solar is what everyone wanted. Does anyone think one survey or meeting is really enough to set public policy or enact law? Another phrase repeated more than once was “state mandates,” and we were reminded the state could reject our town plan if it did not comply with their standards or criteria. So I guess our plan is written by RRPC to state standards and can also be rejected by them or the state.

We have about eleven regional planning commissions in our state that assist town planning commissions in each of the towns assigned to them. You might say that is a good thing were it not for the fact that we keep hearing the words “state mandate.” Oh sure, you get to choose, but you are assisted by regional planners so things will comply with state guidelines that can later be crafted into more mandates. Beware when you see a crisis like climate change being used to create a sense of urgency. Even if it seems to be real, the objective behind it may not be what it appears and the crisis itself could be a mirage.

I think there is a natural tendency for government to drift away from individualism toward collectivism. That may be because we don’t rely on ourselves for survival as we once did. In former days we made choices to sustain our existence, yet now we seem more content to let central planners experiment and direct us wherever they choose. Are we at a point where we are told what we must believe and what we are no longer allowed to do?

Maybe I’m a dinosaur, but I still believe government by the people is important. However, I fear we are drifting too far from it. Individualism may never be as pure as it once was, but when we forget the success of our liberty was based on the rights of the individual, we forfeit our property and freedom to choose; our form of government becomes more collective, and agendas of a few will operate in parallel with it until the individual does not exist.

We’ve been doing this planning thing for years, but can you name something real it has produced other than state mandates? I started with questions about solar arrays but am beginning to think we have larger problems with regard to how we approach planning in Vermont.

Successful people are usually questioners — they will find a way to make things work by their own analysis. But if they are not free to choose, their success may never be realized. When a successful business is sold and the new owner does not understand what made it successful, it will probably fail. Like the new owner of a business we must understand how central planning works or it might also put us out of business.

Just being involved isn’t enough. Even when things sound good, you must question what is being proposed. Your individual liberty and freedom to choose depend on it.

Lynn J. Edmunds is a resident of Wallingford, Vermont.