VICTORY, Vt. — A Vermont town clerk at the center of a voter fraud lawsuit claims that two members of the local three-person Selectboard are “on a power trip” to get her. 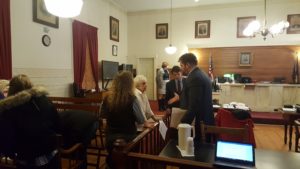 ALLEGED FRAUD: Carol Easter, center, is a defendant in a case before the Vermont Superior Court that accuses her and others of participating in voter fraud. This week, she spoke out against two Selectboard members who are trying to exclude her husband, Lionel Easter, from the board. Lionel Easter is one of two board candidates awaiting a run-off election that has been postponed by a judge’s order.

The assertion came a week after Victory Town Clerk-Treasurer Carol Easter told Essex County Superior Court Judge Elizabeth Mann that a security camera was used to spy on her. Easter, a defendant in a voter fraud case before the court, alleges that Selectboard member Walt Mitchell did the spying.

Easter said she believes local officials are being “downright devious” and hounding her. She also said they are plotting to exclude her husband, Lionel Easter, from the board.

At a March 28 hearing, the court issued a temporary restraining order to stop a a scheduled April 5 Selectboard run-off election between incumbent Lionel Easter (Carol Easter’s husband) and Otis McKennistry. The pair deadlocked in a tie on Town Meeting Day, March 7.

Judge Mann cancelled the planned run-off election, claiming that the town’s voter checklist contains unqualified voters and non-residents. A new date for election will be set at a May 4 hearing.

Attorney Deborah Bucknam, representing plaintiff Tracey Martel, alleged in a March 21 complaint and mandamus petition that 18 defendants engaged in “massive voter fraud” by placing non-residents on the voter checklist. Martel, who ran against Carol Easter in the March 7 clerk and treasurer races and lost by fewer than four votes, is likely to seek her own re-vote.

In addition to concerns about her management of the voter checklist, Carol Easter is accused of having helped a voter fill out a ballot during Town Meeting Day — an accusation she denied.

“I did not fill out a ballot for another voter,” Easter said.

“The voter that is in question … sometimes has a hard time comprehending something, especially if it’s a long passage [of text]. … She asked me for help. She did not understand the questions and so I explained it to her. … She made up her own mind. I did not mark her ballot in any way.”

At last week’s court hearing, Easter said that the accusation of marking a ballot stems from images captured by an electronic camera in town hall, which supposedly shows her placing a mark on the voter’s ballot.

“That security camera was put in that building for safety purposes,” Easter said. “But [Selectman] Walt Mitchell … cut the lock off from the camera [cabinet] and put his own lock on, and would not let anybody get into that cabinet. Finally, he let my husband [Lionel Easter] in there one day and guess what: The user manual and the password are gone. That camera has been used to spy on me.”

The town clerk alleges that Selectboard members Mitchell and Walt Neborsky want her husband off the board.

“These two selectmen had a meeting in Montpelier with the town’s attorney Dan Richardson to discuss the run-off,” Carol Easter said. “My husband Lionel received a telephone call at 3 p.m. about this meeting being held at 10 a.m. the next day. Well, he’s on oxygen getting over a severe case of shingles, so he asked the men if he could phone-in to attend. Neborsky said ‘no.’ Now, according to state law, Lionel had a right to be a part of that meeting.”

She added that the Selectboard members’ actions showed a partisan support for run-off candidate McKinnistry, even before the re-vote can be rescheduled.

In response to another accusation from Bucknam’s complaint that Easter intentionally mishandled absentee ballots for political purposes, Carol Easter said her ballots were “on time and time stamped on a thumb drive.”

The town clerk said that she had no personal or political axe to grind, or any reason to manipulate voters and the balloting process. “I get paid only a few dollars an hour for this position. I am in it for the taxpayer, not for personal advantage,” Easter said.

Walt Mitchell Mitchell and Otis McKinnistry did not return a request for comment.