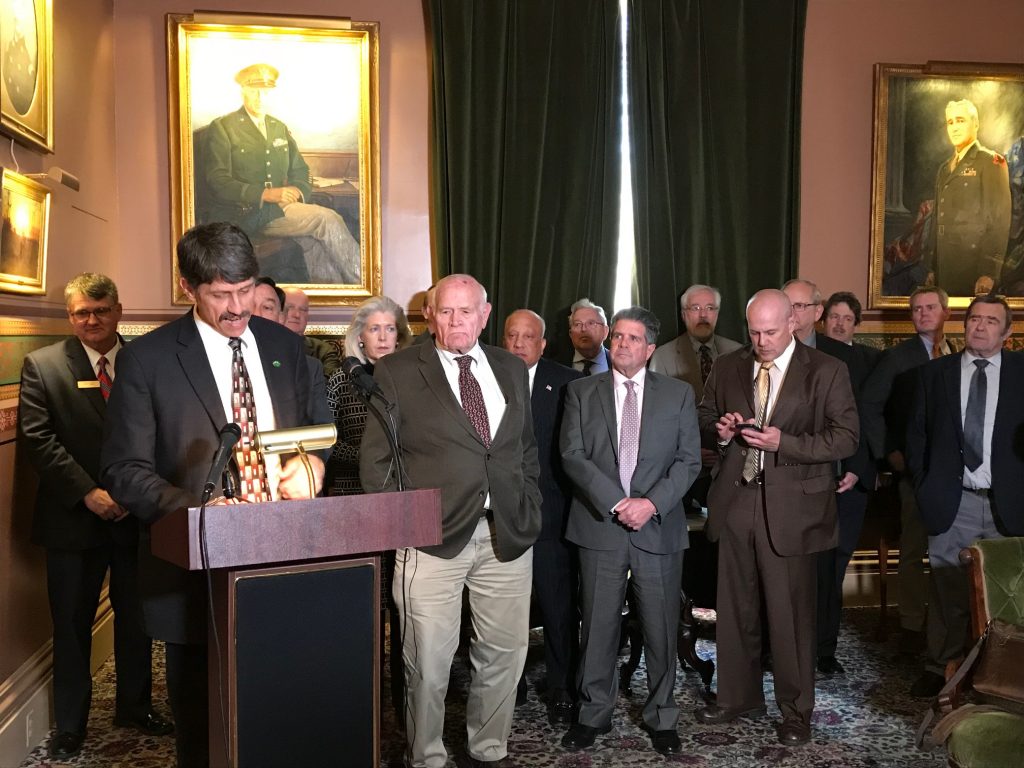 LAST STAND AGAINST GUN CONTROL: About two dozen lawmakers gathered to send a final message to Gov. Phil Scott on the controversial gun bill S.55, which includes expanded background checks, magazine limits, a ban on bump stocks, and an increase in the gun purchase age.

The bill, which the governor plans to sign Wednesday afternoon in a pubic ceremony, includes background checks for all private sales, a magazine limit of 10 rounds for rifles and 15 rounds for handguns, raising the gun purchase age to 21, and a ban on bump stocks.

Two of the four state lawmakers to speak, Sens. Dick Sears, of Bennington, and John Rodgers, of Essex-Orleans, are Democrats. If Scott signs S.55, Rodgers said he would consider making a run for governor to defeat him.

“I’m here to call on Governor Scott today to keep his word and live up to his campaign promises that he would not sign legislation that takes away rights from law-abiding Vermonters,” Rodgers said. “Many thousands of Vermonters donated money, helped fundraisers and convinced others to vote for Governor Scott and came out to vote for him based on that promise.”

Rodgers hinted that Scott’s actions on guns will have a strong influence on his decision about a 2018 bid.

“There’s been a whole bunch of people asking me to run for governor. … I was certainly thinking about it, but I don’t think the signing or vetoing of this bill alone, I don’t think gets me to that decision. There’s much more to take in.”

“I think there is an opportunity to have candidates become interested in the process at this point,” he said. “We need a greater balance, but … it can’t be a one-issue candidate.

Rep. Patrick Brennan, R-Colchester, said he has noticed an increase in support for new Republican candidates in his community.

“We have a local Republican committee meeting every other Monday, normally with about 8 or 10 people. But we had 36 people there and four candidates last night.”

He added, “I would urge Governor Scott one more time to honor his campaign promise and veto S.55 and honor his promises to the sportsmen and women of Vermont.”

Sen. Dick Sears, D-Bennington, who also opposes S. 55, said he wants Scott to sign S.221, which allows guns to be taken away from anyone a judge has determined to be an extreme risk to himself or others. He also urged the signing of H.422, which allows law enforcement to confiscate firearms during an alleged domestic violence situation.

“I think it’s important for Vermonters to recognize that all these groups that usually don’t even talk to each other, or usually talk all over each other, came together to develop two important bills,” Sears said.

“I want to thank the Gun Owners of Vermont, Vermont Traditions Coalition, Gun Sense Vermont, the Vermont Federation of Sportsmen’s Clubs and many other groups who came together to work on these two bills.”

But Bill Moore, a spokesman for the Vermont Traditions Coalition, said the group only supports the legislation on removing guns in extreme risk situations, and after due process before a judge.

“We only definitively support S.221 as passed by the Senate,” he said.

On S.221, Sen. Joe Benning, R-Caledonia, explained how he initially was against the bill but over time he came to support it.

“My first reaction when senator Sears introduced that bill was to scratch my head and say, ‘Are you crazy?’” he said. “But the more that I thought about it and read it, I recognized it was the first actual attempt at getting behind the mind of a shooter before they actually pulled the trigger. And I can’t stress that enough, because every other bill that we’ve been talking about doesn’t come close to getting into the mind of the shooter.”

Keith Stern, a gubernatorial candidate on the Republican side, told True North earlier in the day that he supports the wave of opposition to S.55, and hopes Vermonters will back his attempt to unseat the governor as a result.

“I think people are feeling very betrayed, and with good reason,” he said.