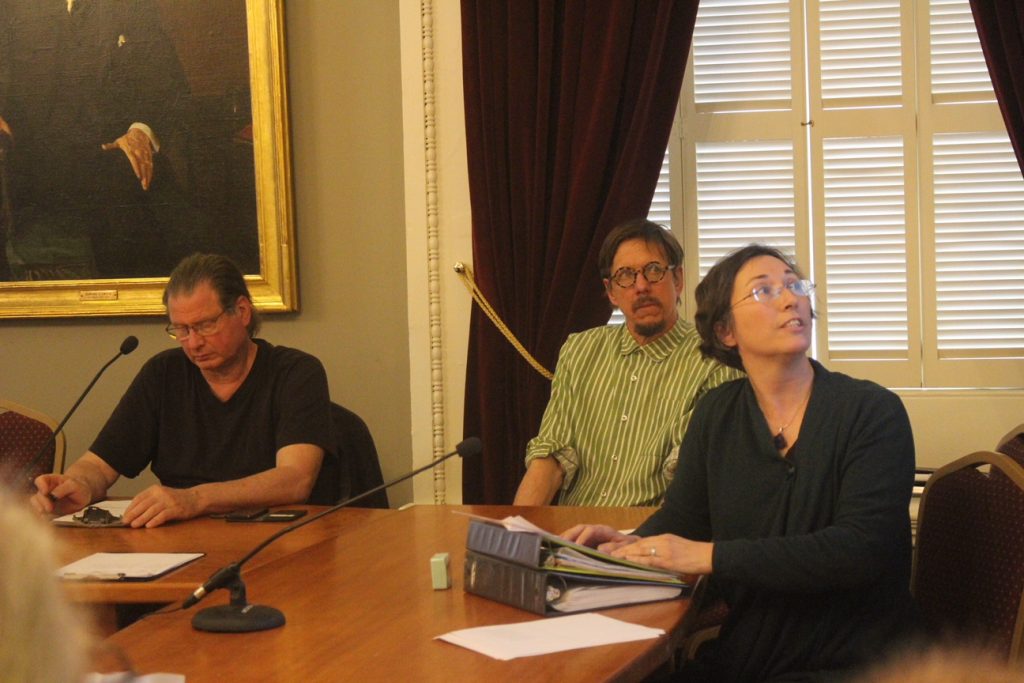 TOO MUCH RADIATION: Iishana Artra, Ph.D., an EMF (electromagnetic fields) testing professional, is calling for a moratorium on the rollout of new 5G Wi-Fi technology in Vermont, which she says has been linked to dangerous health consequences in thousands of studies.

MONTPELIER — Dozens of activists and professionals crowded into Room 10 of the Statehouse on Thursday to call for a moratorium on the Vermont rollout of 5G internet technology.

The high-speed wireless technology is touted as the next big thing for online computing and communications, enabling users to stream ultra-high definition video and play multiplayer internet video games without a hitch.

It’s also never been tested by the FCC or any other government agency for safety.

The newly formed group EMS Vermont hosted the event to express concern over H.513, an act relating to broadband deployment in Vermont.

According to Annette Smith, executive director for Vermonters for a Clean Environment, the term broadband in this bill is undefined. She said it includes infrastructure upgrades to make 5G possible.

“It is defined in statute and means more than just fiber optic,” Smith said on Thursday. “If the purpose of this bill is to deploy fiber optic cable in Vermont, that is what it needs to say.”

The bill is currently in the Senate Finance Committee.

According to a report at ElectricSense.com, symptoms associated with 5G exposure include DNA manipulation, impact on heart rate, impact on immune systems, disruption of cell growth, effects on the skin, and more. EMF (electromagnetic field) waves are considered a Level 2B carcinogen by the World Health Organization, meaning “possibly carcinogenic to humans.”

Iishana Artra, Ph.D., is a Vermont EMF testing professional who was the main speaker at the gathering.

“I am not anti-tech, I am pro-health and safety,” she said. “Evidence-based studies worldwide have clearly established the harmful effects of exposure to cell towers, cellphones and other pulsed radio frequency radiation devices.”

Artra said there are thousands of studies from around the world which support those with concerns regarding 5G health hazards. She added that more than 200 scientists are lobbying the World Health Organization to re-categorize EMF waves from the Level 2B class carcinogen to a class 1, the most serious classification.

She notes that the FCC admits that despite the hasty rollout into public life, including cell towers within our immediate neighborhoods, not a single study exists on the safety of 5G conducted by either the industry or any government regulatory body.

“Yet 5G is rolling out and exponentially increasing the public’s exposure to cell towers,” Artra said. “I’m here today to say on no uncertain terms that it has become necessary for Vermont legislators to stop relying on telecom lobbyists and the FCC. Legislators need accurate information to safeguard the health and safety of Vermonters.”

Smith has made a name for herself by informing Vermonters on the dangers of various energy projects, including industrial-scale wind turbines, solar farms and gas pipelines. She is warning about the advent of 5G technology.

“Many of you I’m sure have heard the line that this isn’t coming to rural areas, it’s only coming to urban areas,” she said. “I had a legislator tell me that just now in the cafeteria.”

She played a video from Tom Wheeler, former chair of the Federal Communications Commission during the Obama administration.

“We must reject the notion that 5G is only coming to urban areas,” Wheeler said. “It will touch all corners of the country.”

Donald Saaf was one of the four members of EMF Safety to speak. He shared a personal experience he had with the current 4G technology, which is exponentially weaker than 5G.

“Everybody could use their computers, watch movies, do their homework, and it was great,” he said. “About a year and a half ago I started noticing some strange symptoms and I found that it was very hard to sleep through the night — I was having a brain fog in the evenings, short term memory loss.”

He explained more symptoms and once he got rid of the smart meter and went back to the hardwired internet, all his symptoms went away. He said with 5G there will be no ability to avoid the radiation.

Marki Webber of East Dummerston was one of several members of the general public to speak. She’s a nurse at Springfield Hospital, and she too described a personal experience she had with sensitivity to the technology.

“When one has the experience of EMF sensitivity when other people around you don’t have that experience, they often are going to discredit you, and they are going to look at you as though you are someone with a tin foil hat,” she said. “My credibility as a science-based person, as an RN, is really important to me.”

In December, professor David Carpenter, director of the Institute for Health and Environment at SUNY Albany New York, told True North about his research and concerns regarding 5G.

“You roll the stuff out, it’s there, and it’s very difficult put the genie back in the bottle when you begin to have clear evidence of harm to the health of the people,” he said.

CLARIFICATION: This story was updated at 10:25 a.m. April 23 to clarify that the assertion that H.513 will accommodate a 5G rollout is attributable to Annette Smith, executive director for Vermonters for a Clean Environment. It is not in the explicit language of the bill.