In 2019 the UN Population Report predicted that the world population would reach 10.9 billion people by 2100 and still be growing. In the 2022 version of that report, the population is expected to peak at 10.4 billion people during the 2080s. “Today,” according to the UN, “two-thirds of the global population lives in a country or area where lifetime fertility is below 2.1 births per woman, roughly the level required for zero growth in the long run for a population with low mortality.” 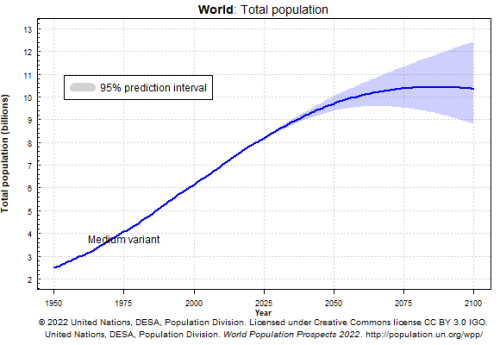 Much of the population increase in the short term comes from an increase in life expectancy. We geezers don’t contribute new fertile members of society. By 2100, the UN predicts the fertility rate worldwide will be well below the replacement rate of 2.1 children per woman (see graph below). If so, world population will be declining. 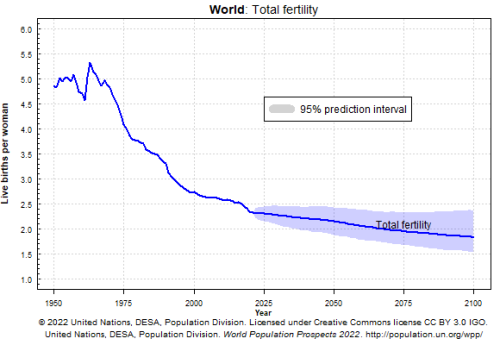 Predictions, can, of course, be wrong and, as we see, are subject to revision. Experience is leading to successively lower population estimates. The trend towards lower fertility with greater affluence is the exact opposite of Malthus’ assertion that population will grow as resources grow and always outstrip resources. Hard for him to imagine either effective birth control or women being in control of reproduction. Lower and lower population growth is already baked in for the next few decades because there are simply fewer women of child-bearing age and below than there were (the number of men is largely irrelevant).

China is a prime example. Its population has already peaked and is poised for precipitous decline. The one-child policy and the preference of parents for a male child doomed it to shrinking population for at least the rest of the century. 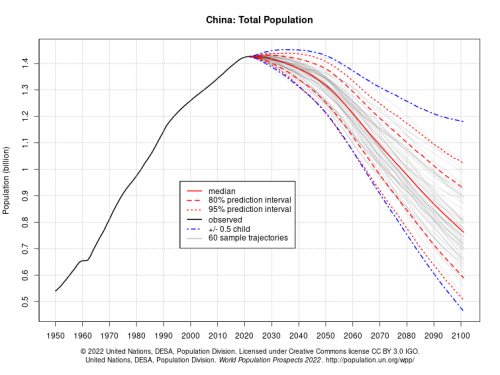 So what’s this all mean?

There is some significant bad news. As the populations age rapidly, there are less and less working people to support each of us retired geezers. Social security trust funds are in danger. Even if we saved enough for retirement, who is going to grow the food and make the goods we still consume? Who’s going to fix stuff that breaks? Less workers and more consumers means… inflation.

We won’t have as many workers but those we do have will be more productive because of technological progress in energy, agriculture, manufacturing, transportation, communication, and logistics. After a painful transition, we can have a world of abundance. Abundance means… deflation. Sure, as goods get cheaper there will be some increase in demand, but it’ll be easily satisfied.

The future will be very different and can be much better!

One example: Today we have a critical shortage of lithium to make batteries; that’s a real problem because we need so many new batteries. But fast-forward twenty years to when all cars are electric and the car population is shrinking rather than growing along with the human population. Lithium is close to 100% recyclable so lithium from retiring batteries is sufficient for new batteries. Almost no mining required. Yes, we have to get through the next couple of decades; but then the problems really do shrink and disappear.

Another example: as food poverty (which is largely a problem of war, corruption, and logistics now) is solved and population declines, less acres need to be in agriculture. More acres can be reforested. Net greenhouse gas emissions go down. Less yield is needed per acre so less pressure to use fertilizer and pesticides. Spot delivery of nutrition and protection by GPS-guided farm tools also reduce the impact of agriculture. Nirvana so long as we can get there

And energy: demand will shrink both with population and continuing technical progress. My 100-watt incandescent bulbs are replaced with 6 watt (or less) LEDs. The fuel efficiency of gasoline cars has greatly increased; electric cars need even less energy. Direct drive motors are more efficient than their predecessors. Heat pumps, in appropriate climates, use much less energy than radiant heat per BTU generated. Natural gas is cheaper and less polluting than coal. Batteries will get better.

We have a transition problem, not an existential emergency.

We don’t have to do dumb things like turning one-third of our corn into motor fuel, blocking pipelines from where energy is found to where it’s needed, or slow-rolling drilling permits. We have time to build new, smaller nukes. We can and should continue to deploy wind and solar so long as we make sure there is a grid capable of sharing the load and sufficient backup whether that is battery, natural gas peakers, hydro, or something else.

Once we are free from panic induced by latter-day Malthusian prophets of doom (who are ignoring “the science”), we can deal with the immediate threat, Putin and his energy weapon, and the intermediate threat, too many geezers and too few workers, and plan our way to a future of abundance.

4 thoughts on “Tom Evslin: Malthus was very wrong about overpopulation”