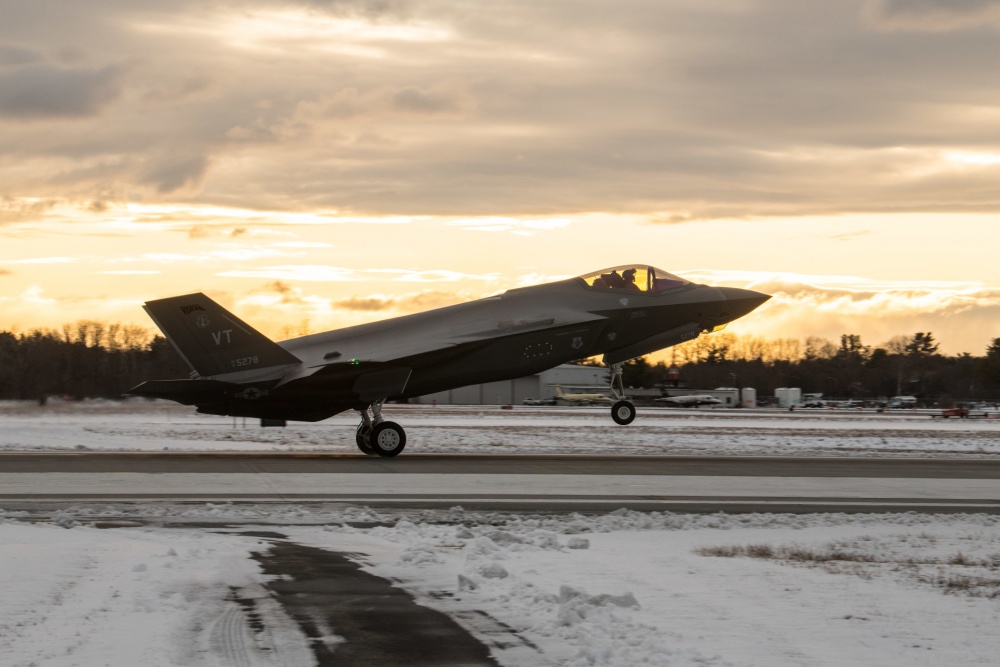 THREE MORE ARRIVE IN VERMONT: At least one top aviation expert says while the F-35s — which are now gathering in Burlington — have a combat advantage in terms of stealth, the jet may not perform well if it doesn’t get the first strike.

SOUTH BURLINGTON — Three more F-35 Lightning II aircraft arrived at the Vermont Air National Guard on Thursday. The base is receiving the jets incrementally each month until 20 are stationed there by mid next year.

The new state-of-the-art fighter jets are intended to replace the similar, but out-of-date, F-16s. The F-16s were an economic and military success for the nation — more than 4,600 were produced since 1976, and 25 other nations have purchased them.

The F-35s are highly regarded for their ability to elude modern radar. But some critics say that design concept comes with a trade-off for its maneuverability in combat.

The planes that came to Vermont arrived from Fort Worth, Texas, and were flown by Vermont Air National Guard pilots who are part of the 134th Fighter Squadron. As of October, at least 430 of the jets have been based across the nation, and Vermont is the first to station them at an Air National Guard base.

“Today’s arrival is part of our scheduled plan to receive all the aircraft through 2020,” said Col. Adam Rice, vice commander, 158th Fighter Wing, Vermont Air National Guard. “I’m very proud that our team is ready and our pilots were able to fly these Vermont aircraft home.”

The first F-35s came to Vermont in September. A large welcome ceremony led by Gov. Scott and hundreds of guardsmen and women took place in October.

“Each aircraft arrival is another step towards finalizing the fielding process at the Vermont Air National Guard,” said Brig. Gen. Greg Knight, Vermont Adjutant General. “Our Airmen have performed remarkably to get to this point and I am, as always, impressed with their dedication towards their mission.”

The new jets have not arrived without opposition. Some residents in Winooski and South Burlington say the loud engines could harm children and reduce property values. Other Vermonters have protested that this new model at some point will be capable of delivering B61-12 bombs, which are “small” nuclear weapons.

With the plane’s new features, pilots can see data projected straight onto their helmet visors. And in addition to avoiding enemy radar, the jet can use its own radar systems to relay critical information on enemy aircraft or missiles back to command centers.

Controversy over design and performance

While the military touts the new model as an elite fighter in aerial warfare, not everyone is sold on the technology. Some experts and politicians question its ability to outmaneuver existing fighter jets, including planes from generations ago.

Pierre Sprey, a co-designer of the F-16, calls the F-35 “inherently a terrible airplane,” and says it is being forced into acceptance based on “PR spin.” He went as far as to suggest if an F-35 were to engage in close-encounter combat with even a 1950’s Soviet MiG-21, he would place his bets on the old model plane.

The late Arizona Sen. John McCain, a Vietnam veteran, had been one of the plane’s harshest critics. He said its decades-long development “has been both a scandal and a tragedy with respect to cost, schedule, and performance.”

But defenders of the new plane that costs between $94 million and $122 million apiece say that the design concept puts a priority on stealth so that it shouldn’t have to outmaneuver its enemies. The idea is to see the enemy first and to strike first “before the enemy knows the F-35 is there,” according to a report at BreakingDefense.com.

In terms of strategic positioning, F-35s are not quite as fast as F-16s. Accord to a Fox News report, the latter can reach speeds of 1,500 mph, whereas Reuters reports the F-35s top out around 1,200 mph.

The Vermont pilots who’ve flown them so far have reported that the handling is similar to the F-16s.