By Joshua Nelson | The Daily Signal

Among the bills pending in the state Legislature that the commision is responding to is House Bill 8, which extends required background checks to sales between private citizens. Anyone trying to privately sell a gun would first have to get it cleared through the gun shop where it was initially purchased. These transactions often relate to guns being exchanged in the online market. 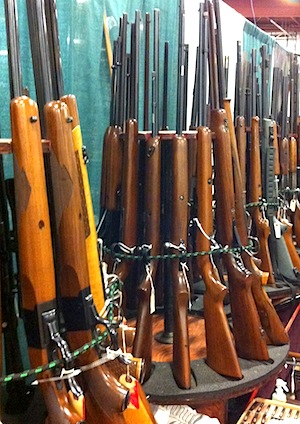 Sheriffs in 12 mostly rural counties say they are not enforcing the measures passed in November until the courts come to a decision on a lawsuit filed by the National Rifle Association and the Second Amendment Foundation.

Sheriffs within the state and gun owners from rural areas are criticizing such bills.

Quay County holds a population of about 10,000 citizens. Republican lawmakers represent the minority in both the state House and Senate chambers. The House Republicans commended the Quay County Commission for endorsing the resolution.

Since the installment of Democratic Gov. Michelle Lujan Grisham in January, New Mexico’s gun owners will face legislation such as programs to remove firearms from seemingly suicidal or dangerous people. Other measures would restrict teachers from carrying guns in the classroom and extend child neglect laws if guns aren’t properly stored at home.

While a total of 14 states now permit police or civilians to seek court orders that would seize guns from people deemed threatening, counties in other states are standing their ground.

Washington is another state with counties refusing to enforce state-sanctioned gun control measures, such as restrictions on semi-automatic rifles requiring buyers to be at least 21 years old, pass a safety course, and undergo expanded background checks and gun storage requirements.

But again, sheriffs in 12 mostly rural counties say they are not enforcing the measures passed in November until the courts come to a decision on a lawsuit filed by the National Rifle Association and the Second Amendment Foundation.

In their lawsuit filed in U.S. District Court in Seattle, the National Rifle Association and Second Amendment Foundation argue the bill violates the Constitution’s Second and 14th Amendments, in addition to gun sellers’ rights under the Commerce Clause. The groups do not dispute the training requirements or enhanced background checks of the initiative.