NEW HAVEN, Vt. — Antique tractor collecting may not have the same level of romance like the old automobile hobby, but for a certain group of folks (mostly men, mostly ex-farmers, or those same who grew up on a farm), restoring an old farm contraption has the same irresistible allure as, well, gingerly rubbing a genie’s bottle with a dollop of 10W-40 to help things along.

Roger Choiniere, 84, a resident of Addison County, helped organize this year’s eye-popping exhibit of antique farm tractors at the Addison County Fair & Field Days. He joined fellow tractor collectors at the New Haven fairgrounds to show off their pride and joys and inspire younger folks to appreciate these carbon-footed workhorses of yore.

Under the protective canvas roof of a Field Days big top, over 20 beloved tractors are on display now through Aug. 14. 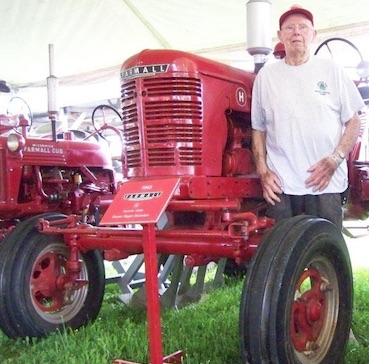 Included in the display are rare Oliver, Ford, and Farmall tractors, among others. Owners hover nearby, so everything you always wanted to know about tractors can be easily answered by these experts.

“I grew up on our family farm in Lincoln,” Choiniere said. “My father, Emile Choiniere, had a 1943 Farmall brand tractor, so I was familiar with it, and went out to find one of my own, over 70 years later.”

As a young man, Choiniere moved away from the family farm and sought employment in the aviation industry in Connecticut. Years later, retired, he moved back to Addison County and began a search for the ghost of Emile’s ’43 Farmall, built by McCormick-Deering of International Harvester.

It’s hard for the casual observer, like this reporter, to keep track of these old tractors since many manufacturers went on to merge, spin-off, or go out of business altogether. Today, foreign builders, with cheap labor and more grit than America’s short-term-focused builders, are making inroads as we see more Japanese and European brands at work in U.S. farm fields.

“Green Mountain Tractor had a ’43 that was in a rollover, so I purchased it and restored using the parts of a second tractor,” Choiniere said.

Choiniere cherishes the simplicity of an old tractor like his ’43 Farmall.

Like today’s electronic, high-tech tractors, antique tractors can perform the same job, but they were (and in many cases still are) significantly cheaper to own and operate. Replacement parts, even for a World War 2-era model, aren’t too difficult to find either. So it’s not overly difficult to keep an antique tractor at work in the 21st century.

“Complexity is not necessarily an improvement over simplicity,” Choiniere muses. He still uses his ’43 tractor, not to plow fields but instead plow snow at home during Vermont’s long winter months.

“At next year’s Field Days I may bring along my homebuilt plow to show how a 78-year-old tractor can still do a lot of hard work around the farm, and without all the costly modern electronics.”

One thought on “The tractor king: Roger Chioniere”