By Chris Krug | The Center Square

We’re only a few weeks into the new Biden-Harris administration and the debate over a much higher minimum wage is already here.

If you follow the news – even esoterically – you know that this story comes around at least once a year and has for the past decade. National mainstream media can’t get enough of the “Fight for $15” because it has a Robin Hood vibe to it for one thing, and is an undeniable clickbait monster for another.

With the ball in hand and blockers out front, President Joe Biden and Vermont Sen. Bernie Sanders, whose progressive brand of politics pushes into democratic socialism, lurched last week into the idea of raising the federal minimum wage to $15. 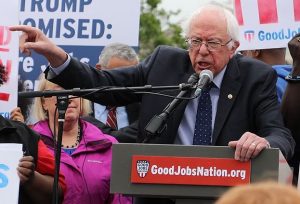 The Congressional Budget Office’s latest report suggests a $15/hour minimum wage would lift about 900,000 Americans out of poverty. More importantly, the CBO acknowledges that such a wage mandate would be the root cause of the elimination of about 1.4 million jobs.

As The Center Square was among the first to report, after word from Biden that he was thinking of plunging forward on a higher minimum wage, the underlying consequences of forcing a minimum wage at the federal level are well known and have been for some time.

Nonetheless, here we go again with an attempt to revive a non-starter issue that – if ever adopted at the federal level – threatens a generation of entry-level workers from achieving the fulfillment and responsibility of their first job while simultaneously placing untold pressure on low-skilled workers whose contributions to their employers may not justify the new wage level.

To establish a baseline of understanding, the federal minimum wage for 2021 is $7.25 an hour. Most states around the country hang at about that level.

The actual minimum wage range in states begins at $5.15 in Georgia and Wyoming (for workers who don’t meet the requirements of the federal Fair Labor Standards Act) and scales up to $14 an hour in California. In Washington, D.C., where barbed wire still rings our Capitol, it’s $15 an hour – tops in the country.

The problem is a simple one: $15 isn’t a magical pay rate that fixes poverty. Even the Congressional Budget Office’s latest report suggests a $15/hour minimum wage would lift about 900,000 Americans out of poverty. More importantly, the CBO acknowledges that such a wage mandate would be the root cause of the elimination of about 1.4 million jobs.

In short, even if you’re not so hot at math, you can see that it’s not a great tradeoff against any set of circumstances.

Now consider this economy with unemployment that is nearly twice today (6.3%) what it was last February (3.5%) and struggling to rise above the recent past and current state-level policy decisions governments made as part of their respective COVID-19 mitigations.