By Nina Owcharenko Schaefer and Robert Moffit | The Daily Signal

Don’t get caught up in reports of divisions within the Democratic Party over “Medicare for All” vs. “public option” legislation.

One needs only to repeat the words of then-Rep. Barney Frank, D-Mass., who, during the debate on Obamacare, said, “I think that if we get a good public option, it could lead to single payer and that is the best way to reach single payer.” 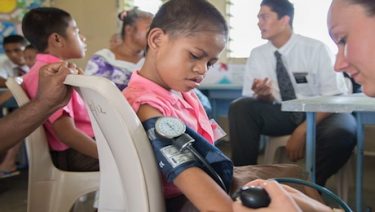 Americans should look to other government-run health care schemes, such as Britain or Canada, to see the results of a public option — longer wait times, fewer providers, and less access to innovative treatments.

We looked at six leading public option legislative proposals. The bills differ in design, but all these proposals would tilt the playing field in favor of the public option, drive out existing private health coverage options, and ultimately leave the government plan as the dominant, or only, health plan in the insurance markets.

Setting aside the individual differences, here’s how a public option scheme would work:

Step One: Create the illusion the government plan is less expensive by shifting costs to doctors, hospitals, and other providers.

All the public option proposals depend on some version of government payment. Government payment rates, such as those used in Medicare or Medicaid rates, serve as a warning against applying them more broadly.

For example, the Medicare trustees report that keeping the current Medicare payment rates for hospitals, nursing homes, and home health agencies will lead to less availability of medical services and “jeopardize” seniors’ access to quality care.

In Medicaid, low payment rates also have led to less patient access to doctors and other medical professionals and diminished access to quality of care.

Step Two: Keep doctors and other providers from rejecting these low government payment rates by coercing them into joining the new government health plan.

For instance, doctors who do not sign up for the public option could be forbidden from participating in Medicare or Medicaid.

Directly or indirectly, the public option proposals would establish a compulsory program by pressuring providers in one form or another to join the new public option or be banned from all government business. This would compromise the personal freedom and professional independence of physicians and other practitioners.

After being pressured to participate in the public option and accept government rates, doctors and other medical professionals likely would seek to make up these losses by demanding higher payment from private health plans.

To keep their provider networks intact, private plans would have little choice but to either pay the higher rates or reduce their capacity.

This, of course, would lead to higher insurance premiums for consumers. The higher premiums would leave the private competitors with fewer enrollees and even higher costs.

Ultimately, many, if not most, of the private options would be driven out of the nation’s insurance markets altogether.

With more private competitors out of the way, the new government plan would either be the dominant health plan or the only plan available, leaving patients without much choice in a shrinking private health insurance market.

Faced with the true and ever-growing cost of maintaining a government-run health plan, it would only be a matter of time before Congress compels taxpayers and patients to cover the losses and foot the bill for the new health care program.

The End Game: Given the underlying economic and political dynamics of these public option proposals, the results are predictable: a collapse of choice and competition in the health insurance markets, more costs shifted onto taxpayers and providers, and the erosion and elimination of private health care alternatives for patients and their families.

Don’t be fooled. In the end, a public option will be no different than so-called Medicare for All. It would just materialize on the installment plan.

3 thoughts on “The public option: government-run health care on the installment plan”