Enviros are furious at a Trump administration rule change to freeze the Corporate Average Fuel Economy (CAFÉ) requirement for model year 2020 passenger cars at 37 miles per gallon, instead of increasing it to the 54.5 mpg by 2025 set by the Obama administration in 2012. It would also revoke California’s power to set vehicle carbon dioxide emissions standards and mandate sales of zero-emission vehicles, which 12 other states, including Vermont in 1996, have adopted.

When the EPA released its proposed rule changes on Aug. 2, California’s governor and attorney general immediately declared all-out war to defeat the changes in the courts, backed up by the attorneys general of 19 other states, including Vermont.

When Congress enacted the CAFÉ statute in 1975, it sought to push the automakers to build high-mileage vehicles to defend against serious fuel shortages and skyrocketing pump prices caused by the Arab oil embargo of 1973.

The 1975 law, the Energy Policy and Conservation Act, explicitly prohibits state “enforcement of any law or regulation related to an average fuel economy standard under this chapter” and preempts state laws merely “related to fuel economy standards.” This provision was aimed at preventing a 50-state patchwork of fuel economy requirements that automakers cannot realistically meet.

A major challenge to California emission standards came in Vermont, in a 2007 case titled Green Mountain Chrysler v. Crombie (Vermont Agency of Natural Resources Secretary George Crombie). In an exhaustive 243-page opinion, Federal District Judge William Sessions found a way to skirt the apparently plain language of the EPCA. He held that the act did not preempt California (and Vermont) from imposing their own identical fuel economy rules, disguised as tailpipe emissions standards.

The auto industry dropped an appeal as part of a 2009 deal with the Obama administration. In it, the administration bullied the automakers into accepting ever-stricter CAFÉ standards, continuing California’s exemption, and ending industry resistance to the EPA’s controversial “endangerment finding.” This was accomplished largely because the Obama administration at the time owned 61 percent of General Motors plus 8 percent of Chrysler, and was engaged in bailing out GM to benefit the United Auto Workers.

Three years later the Obama EPA declared a 54.5 mpg fuel economy rule starting in 2025, which is what the Trump EPA rule is designed to forestall.

What does it mean to ordinary Vermonters for the federal government to freeze the CAFÉ standard for new passenger cars at 37 mpg in 2020, rather than pushing it up to 54.5 mpg in 2025?

A higher mpg CAFÉ rule means that cars have to be some combination of smaller, lighter, less comfortable, less powerful, less cold-weather-capable, more fuel-efficient, or electric or hydrogen powered.

Smaller, lighter cars are not what consumers want, and they pose safety problems when crashing into larger vehicles, concrete and trees. Wringing more fuel efficiency out of engines and drivetrains makes the cars considerably more expensive. Some of that added front-end expense can be recovered by reduced fuel consumption over the car’s lifetime, but it’s not likely to be 100 percent. 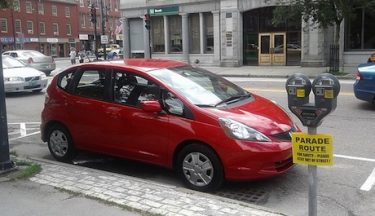 The Honda Fit, such as this one parked in Montpelier, is one of the most fuel-efficient cars on the market, getting about 33 mpg in the city and 40 mpg on the highway.

To meet the CAFÉ fleet standards, the automakers have to push up prices on SUVs, vans, and pickups to subsidize poorly-selling high-mpg cars. SUV and truck owners will run their vehicles longer, meaning higher maintenance costs and more older vehicles on the road without later-model safety and efficiency features.

With the oil embargo 45 years in the past, the ready availability of affordable gasoline and diesel fuel, and the astounding improvement in controlling vehicle-emitted pollutants like nitrogen oxide, carbon monoxide and particulates, why is the government (up to now) constantly pushing for stricter CAFÉ regulations? Why not just let consumers vote their preferences in car performance, comfort, fuel economy, price and other trade-offs?

The answer, of course, is the urgent need to force consumers to join in the battle against the menace of climate change. In Vermont, the Shumlin-Scott “90 percent of all energy renewable by 2050” goal can clearly not be achieved until the majority of cars, SUVs and pickup trucks are powered by electricity, which CAFÉ is designed to encourage. This will supposedly come from vast solar farms and more wind towers, backed up by Quebec hydro.

The latest ESSEX carbon tax plan is designed to tax gasoline, diesel, heating oil, natural gas and propane, and direct half of the revenues to lowering the cost of the increased electricity needed to power a vast fleet of electric cars (now less than three percent of all Vermont vehicles.)

Is government-forced vehicle fuel economy worth it? In his expert testimony in the 2007 Green Mountain Chrysler case, leading climatologist Dr. John Christy testified that “implementing the [CAFÉ] regulations across the entire United States would reduce global temperature by about 1/100th of a degree by 2100.” Judge Sessions’ opinion noted that “[Climate change godfather Dr. James] Hansen did not contradict that testimony.”