Editor’s note: This commentary is about conservative author William F. Buckley Jr., who passed away on Feb. 27, 2008, at the age of 82.

By Ed Feulner | The Daily Signal

Conservatives owe a huge debt to Bill Buckley. He didn’t just start a magazine when he founded National Review in 1955. He planted a flag for many of us who bristled at the liberal orthodoxy then prevalent in American society.

The books that followed, along with his hosting television’s “Firing Line” for 33 years, showed how the tenets of conservative weren’t something that had to be consigned to history books and musty tomes. They were eternally true. They could — and should — be applied to the issues of the day.

For so many of us, the philosophy of freedom found its voice in Bill Buckley and its platform in National Review.

It soon became clear that Bill was developing not just a readership, but a national movement. NR was not simply another journal, but a political act. 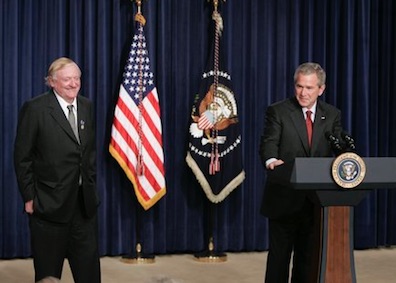 We intend, wrote Bill to a prospective supporter, “to revitalize the conservative position” and “influence the opinion-makers” of the nation.

But Bill’s influence went beyond his landmark magazine. His biography itself is conservatism’s history.

An early high point was his run for mayor of New York City in 1965. Sounds quixotic, sure, but he won 13.4 percent of the vote and admiration in the most unlikely places.

During the campaign, “a senior editor of The New York Times confessed that he had taken to dispatching different reporters to Buckley’s press conferences because ‘everyone who came back after a couple of them said he was going to vote for [him]’.”

Early on, Bill enlisted a group of us to brainstorm for his campaign. He set forth a 10-point program that recommended such trail-blazing ideas as:

• Anyone without a police record should be allowed to operate a car as if it were a taxi. (Uber, anyone? In 1965.)

• State and federal authorities should suspend property and income taxes for all entrepreneurs who established businesses in depressed areas in inner New York City. That was two decades before Jack Kemp’s enterprise zones.

• All welfare recipients should be required to do “street cleaning and general prettification work” for the city. Here was an early draft of workfare rather than welfare.

Bill defended a conservatism that was principled but not dogmatic — that balanced long-term goals with present-day demands.

In “Up from Liberalism,” Bill disposed of modern liberals in just a few words. The conservative alternative, he wrote, is based on “freedom, individuality, the sense of community, the sanctity of the family, the supremacy of the conscience, the spiritual view of life.”

I first met Bill in October 1964, a month before Barry Goldwater’s “Glorious Defeat.”

That meeting was to become the organizing meeting of the Philadelphia Society. Attended by Bill and by Don Lipsett (the organizer), Frank Meyer (Bill’s deputy at NR), Milton Friedman and myself. This was pretty heady company for me, a 24-year-old kid from Chicago.

At that meeting we formed the Philadelphia Society, and they “elected” me its treasurer. I protested that I was an impecunious graduate student at the Wharton School. Bill Buckley wrote a check for $100 on the spot that enabled me to open a bank account back in Philadelphia.

I never paid him back or even sent him an acknowledgement for his tax-deductible contribution.

And yet, can any of us really pay Bill Buckley back? After all, because of him, our lives and the world were never the same again.

So thank you, William F. Buckley, Jr. You’ve been gone now for 12 years, but your voice and your influence live on.

Edwin J. Feulner’s 36 years of leadership as president of The Heritage Foundation transformed the think tank from a small policy shop into America’s powerhouse of conservative ideas.

2 thoughts on “The enduring influence of William F. Buckley”