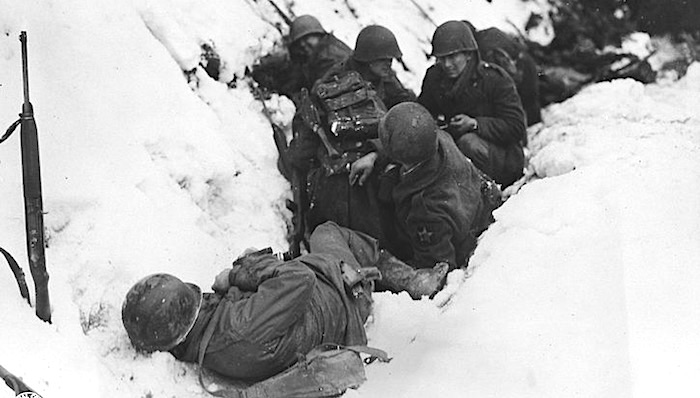 U.S. infantrymen of the 9th Infantry Regiment, 2nd Infantry Division, First U.S. Army, crouch in a snow-filled ditch, taking shelter from a German artillery barrage during the Battle of Heartbreak Crossroads in the Krinkelter woods in December 1944.

Those American soldiers who are still alive, who were eyewitnesses to one of WWII’s most critical events, the Battle of the Bulge, are at least 92 years-old today.

It was on December 16, 1944, that several-hundred-thousand German army troops attacked on several fronts in Belgium, Luxembourg and Northern France, in a brazen attempt to split the Allies and capture the critical sea port of Antwerp.

In addition to the troops, the German High Command placed thousands of tanks, anti-tank, and artillery against its enemy made up of mostly American units. The attack came as a complete surprise — being outnumbered in troops, equipment and supplies.

For many Americans, both in Europe and at home, it was thought that by Christmas, because of the success of the D-Day invasion at Normandy six months earlier, the war would be close to being over.

In Washington, D.C., at Christmas 1944, the news of the German offensive must have been devastating to the ailing president, Franklin Delano Roosevelt, who in four months would be dead.

At the time, FDR was consumed by the reports coming to him from his military commanders of the army and navy of the losses stemming from the invasion of the Philippines Islands. At the same time, FDR was giving the go-ahead to his Pacific commanders to launch, in two months to the day, the 100,000 Marines invasion on the Island of Iwo Jima.

What President Roosevelt did not know on December 16, 1944, was that the German breakout in Europe would result in one of the greatest losses of American lives in the history of warfare — close to 20,000 by time the battle was over 40 days later.

While blame can be placed in front of the Allied leaders for allowing such an attack by the German army to have taken place, they also are to be commended for acting skillfully in repulsing the invasion. Within weeks, the size of the Allied forces had doubled, and the same with equipment and supplies.

Over the last 75 years, numerous stories have come to the forefront about the heroic action of the infantry solider who had to endure fatigue and illness, as well as the hardship of one of Europe’s worst winters in history, in attempting to hold back the German advance.

No place was this more poignant than in the Siege of Bastogne. The city’s critical highway location was held by an American airborne division in order to prevent the German army’s advance to Antwerp. 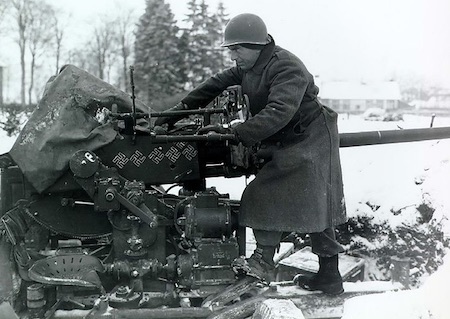 Paul Romanick, a private with the antiaircraft battery of the 1st Infantry Division, U.S. Army, wipes and cleans a 40-mm antiaircraft gun at snow-covered Sourbrodt, Belgium. The gun has six swastikas painted on it, one for each German plane it has brought down.

There are many stories, books and movies that describe what took place during the siege and how it was broken. One particular story was often told by the sportswriter and author from Dorset, Vermont — the late W.C. (Bill) Heinz, who, along with his tent-mate, Ernest Hemingway, was a war correspondent in France at the time of the siege.

In the early 1960s, Heinz was sitting next to Ralph Houk in the dugout of the New York Yankees, reporting on the team managed by Houk. The former catcher and manager of the Yankees leaned over and told Heinz that Americans placed too much emphasis on baseball games and sports in general.

Houk conveyed to Heinz that in 1944, at Bastogne, he was ordered to scout where the Germans had placed their siege guns. He and a few other officers crawled in the snow outside the encircled city and mapped the gun emplacements, thus giving General George Patton the information he needed to break the siege. Houk became a hero, receiving a Silver Star, but few knew of it.

Three years later, in 1947, in a World Series baseball game at Yankee Stadium, Houk, the Yankee catcher, missed a tag at home plate by foot or more. The photo of the missed tag went around the world with the caption, “Houk the Goat.”

Houk told Heinz that there is something wrong here, and you are the writer, so explain it. The fact is it doesn’t need any explaining. Today, those 92-plus year-olds, who got the world through WWII, are indeed the Greatest Generation.

3 thoughts on “Keelan: The Battle of the Bulge, 75th anniversary”