MONTPELIER — Although numerous Northeast governors have either backed out of or made statements against the regional Transportation and Climate Initiative, Vermont state lawmakers on Thursday discussed the matter as if TCI remains very much alive.

“Can we say we are doing it even if the governor [doesn’t sign on]? I believe so,” said Rep. Curt McCormack, D- Burlington and the chair of the House Transportation Committee.

The Transportation and Climate Initiative would set a cap on the amount of carbon-based fuel that distributors can sell, and going above that amount would bring additional costs. Critics call the scheme essentially another form of a carbon tax. 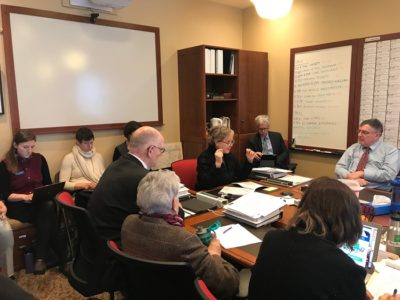 TCI LIVES: Karen Glitman, senior director for the Center for Sustainable Energy, says legislators should give themselves the power to sign onto a regional carbon tax so that executive action by the governor can’t undermine the initiative.

Not all lawmakers in the committee were sure why they were spending more time on TCI when statements from Gov. Phil Scott and others seem to suggest the initiative is unlikely to move forward. Rep. Brian Savage, R-Swanton, told True North he was surprised to see it listed on the committee agenda.

The House Transportation Committee spent more than an hour taking testimony from two policy experts who discussed the program.

Those experts were Rick Weston, principal and director of policy for the Regulatory Assistance Project, and Karen Glitman, the senior director for the Center for Sustainable Energy and a senior fellow for the Energy Action Network.

Glitman told the committee she believes decisions about the TCI should be in the hands of lawmakers, with or without the governor’s final approval.

“Folks may recall New Jersey withdrew from REGGI [Regional Greenhouse Gas Initiative – similar to TCI] and that did not require legislative action; that was just an executive order and that is sort of a rapid change to the market that could cause some disruption,” she said. “I encourage you to maintain that ability in the legislature to get in and get out.”

Weston said while the TCI will raise transportation costs, the aim is to stop the use of carbon-fuels.

“Yes, TCI will have a price impact on transportation fuels, but I think that what we do with the revenues is key,” he said. “I think Karen will talk at length about this, but I certainly would encourage that if you should decide to be a part of TCI, the revenues should be used for carbon-reducing activities.

He added that if other New England states join TCI and Vermont does not, Vermonters may end up paying more for fuel anyway, because Vermont’s fuel sources come from out of state.

Both Weston and Glitman touted electric vehicles and upgrades to public transportation as key areas that could be targets of TCI revenues. EVs currently continue to cost more than their gas-engine counterparts, with new cars starting at around $30,000 after federal tax credits that can be as much as $7,500 on top of additional state subsidies.

Glitman said she will be monitoring the progress of a used-EV program in Oregon to see if this helps open up EVs to low-income drivers.

“It will be the first statewide used EV program in the nation. I’m going to be very interested to see how that affects the market,” she said. “It also has a low-income booster, so someone in Oregon could be able to technically, feasibly purchase a used EV for less than $5,000.”

According to a report on Edmunds.com, used EV buyers should know the primary component in their used EV is a used battery. Performance and range will diminish over time and each model will vary. It also states that the federal government is required to replace EV batteries that completely fail before 80,000 miles, which costs around $5,500 plus labor.

Another idea for TCI money is to redistribute it directly to low-income people. Glitman noted this is the policy in California.

“They have required that a certain amount go to disadvantaged communities, and there is some geographic targeting of funds. That may be something of interest,” she said.

She added that the legislative direction of such funds should remain broad so that a separate board can direct the funds more specifically.

“You don’t want to have to require an act of the legislature to change something that should probably be changed on more of a scientific [measure] … based on data that says what we should do,” she said.