By Julia Seymour | The Center Square

It wasn’t long ago that Dartmouth College, an Ivy League institution nestled in Hanover, N.H., was praised for being one of the nation’s top colleges for free speech. In 2011, it held a prestigious “green light” rating from the Foundation for Individual Rights in Education (FIRE) and was named one of the seven best schools for free speech.

Dartmouth no longer holds that distinction. This year, it ranked nearly at the bottom (52 of 55) in the 2020 College Free Speech Rankings, which is based on an ambitious survey of nearly 20,000 students jointly conducted by RealClearEducation, FIRE, and research firm College Pulse. It was the lowest ranking Ivy on the list.

The survey found 68% of Dartmouth students have felt they could not express their opinions “because of how students, a professor, or the administration would respond.” They said the three hardest topics of conversation were race, followed by affirmative action and immigration. 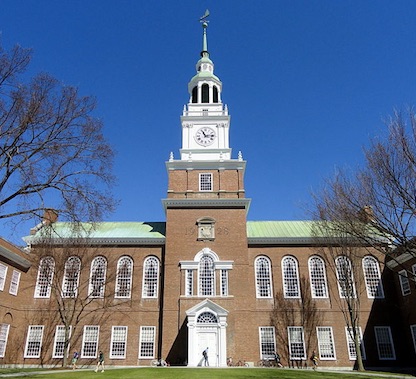 Taken together, this suggests students at the small, elite institution may be more wary of social repercussions than academic ones.

Although students with diverse values and perspectives shared examples of self-censorship on the survey, Dartmouth’s liberal students, who make up the clear majority on campus, indicated they feel more free to have difficult conversations than their conservative classmates do.

Recent events shed light on the relationship between politics and free speech on campus. A petition started in July attacked the conservative student newspaper, The Dartmouth Review, for the views of students formerly associated with it. The petition called for the administration to take action against the publication, which is run independently by students. Petitioners accused the paper of being an “incubator of racist hate and white supremacy,” citing a former editor’s online comments and other past columns. More than 1,000 students, alumni and faculty had signed by late October. The Review defended itself and called it “ridiculous on its face to claim that our staff today is responsible for articles written four decades ago.”

RealClearEducation spoke to three current students with different political views about the free speech climate at Dartmouth. Jack Nicastro is a libertarian and director of programming for Dartmouth Libertarians. Jack Hardie describes himself as having “centrist to libertarian tendencies” and as an individualist. Marc Novicoff said he definitely leans left, sometimes further left than many Democrats. It depends on the issue. All three indicated conservatives were likely to have the hardest time sharing their views at Dartmouth.

Hardie, a senior, said, “I wouldn’t consider [Dartmouth] the most tolerant towards free speech.” He said there’s a lot of “group thinking” at Dartmouth, some of which he attributed to Greek culture and the small campus. After a bad experience with a fraternity, he felt he couldn’t honestly share his views about Greek life.

Nicastro’s experiences have been more positive. The sophomore called it a “great place to be a Libertarian.” He’s never experienced discrimination for sharing his views just occasional angry responses.

The question remains: how did Dartmouth fall off the “best” list and become a place so many students don’t feel to speak their minds? A string of incidents and changes to campus policies may shed light on the issue.

Dartmouth lost FIRE’s “green light” rating in 2015 after creating and maintaining “bias incident reporting” protocols. It defined bias-related incidents as behaviors showing “hostility” (including jokes and stereotypes) toward another for race, gender, sexual orientation and other characteristics.

In early 2018, FIRE downgraded Dartmouth to “red light” status for a broad and subjective IT policy prohibiting users from posting or sending illegal, “offensive” or “hateful” content. Later that year, school officials agreed with FIRE’s criticism and altered the policy, although the last of the language wasn’t changed on the website until this year.

It currently has a “yellow light” rating for its harassment policies and the bias reporting policy.

Although Dartmouth has improved its speech policies, worrisome incidents have occurred. In 2014, a group of students made 70 social justice demands which included calls to ban or punish certain types of speech. There have also been instances of vandalism against controversial or unpopular views, and shoutdowns, protests and disruptions of controversial (generally conservative) speakers.

In 2014, an incensed student drove onto the lawn to damage student group Vita Clamantis’ pro-life flag display. In 2015, a Black Lives Matter display was defaced. And in 2016, BLM supporters stripped a College Republicans bulletin board display honoring police officers and replaced the content. Some students even stayed near the bulletin board to prevent the College Republicans from restoring their display.

Novicoff, a junior, is editor-in-chief of the Dartmouth Political Times. Novicoff recalled attending Dartmouth alum Dinesh D’Souza’s speech his freshman year out of intellectual curiosity, even though his political beliefs are considerably more liberal than D’Souza’s. Not only did students shout and interrupt the speech, but afterwards the hall was filled with students shouting, “Go home, racist!” as attendees were leaving the event.

“Nobody was supposed to be there, that’s how it felt,” he said.

Novicoff said it isn’t that students think they aren’t “allowed” to say certain things. It’s fear of the attention and judgment that could result. “I think that expressing, let’s say conservative views whether that be even in the lunchroom or in the classroom. I think that’s a thing that most people don’t do. Because they are aware that people will be judging them.”

3 thoughts on “Survey: Dartmouth, once a leader in free speech, now ranks toward bottom”